Fayose: Omirin asks court to strike out suit against impeachment 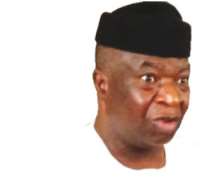 The factional Speaker of the Ekiti State House of Assembly, Adewale Omirin, on Monday asked a Federal High Court in Abuja to strike out a suit seeking to stop the moves by the 19 members of the All Progressives Congress in the state  House of Assembly to remove the state governor, Mr. Ayodele Fayose.

Justice Evoh Chukwu on Monday fixed May 21 for hearing in the notice of preliminary objection filed in opposition to the suit by Ominrin's lawyer, Mr. Terence Vembe.

The defendants are the Inspector General of Police, the embattled Speaker of the House of Assembly, Dr. Adewale Omirin and 21 others.

â€ŽThe judge had on April 23, 2015, made an ex parte order directing Ominrin and the 22 other defendants in the suit to appear in court to show cause why the court should not grant an order of interim injunction restraining them from going ahead with the plan to remove the governor and his deputy, Kolapo Olusola.

But on Monday only Omirin (the 2nd defendant) and the Clerk of the Ekiti State House of Assembly (the 21st defendant) were represented by their lawyers in court.

Vembe told Justice Chukwu during the proceedings that his client (Omirin) was not bound to obey the court's order made on April 23 because the court lacked jurisdiction to entertain the suit.

He said he had filed a notice of preliminary objection anchored on the grounds that the court lacked jurisdiction to hear the case because leave of the court was not sought as provided for in section 97 of Sheriffs and Civil Processes Act.

However, the plaintiffs' counsel, Mr. â€ŽAhmed Raji (SAN), had earlier asked the court to proceed to grant the order of interim injunction since none of the defendants has any counter-affidavit showing cause why it should not be granted.

He argued that the defendants had disobeyed the order of court directing them to do so.

On the other hand, the counsel representing the Clerk of the House of Assembly, Mr. D. Owolabi, sought for time to file his counter-affidavit.

But Vembe said his client was not entitled to file such counter-affidavit since â€Žhe was challenging the court's jurisdiction.

The court then opted to hear Vembe's notice of preliminary objection before taking any further step in the suit.

It will be recalled that Fayose, his deputy and other plaintiffs, had last Wednesday withdrawn a similar suit which he filed ahead of the one before Justice Chukwu.

Fayose and his deputy are not part of the plaintiffs in the fresh suit.

Justice Chukwu after adjourning the matter on Monday clarified that he did not make any restraining order on April 23.

But he said that ordinarily by the virtue of a previous Supreme Court judgment, parties ought not to take any further step concerning the case once a case is filed with regard to it in court.

The judge had on April 23 refused to set aside the impeachment process but ordered that parties should maintain status quo as oâ€Žf that day.

He however ordered the defendants to appear in court at the next hearing date to show cause why the order of interim injunction sought by the plaintiffs should not be granted.

The orders granted by Chukwu on Thursday read as follows, 'That leave is granted to the plaintiffs/ Applicant to issue and serve the originating summons and all other processes in this suit on the 2nd - 21 defendants in Ekiti State outside the jurisdiction of this honourable court.

'That leave is granted to the plaintiffs/applicants to serve the originating summons and all other processes in this suit on the 2nd - 21st defendants by substituted means by advertising same in the newspaper.

'That the service of the Originating Summons and all other processes in this suit on the 2nd to 21st defendants are deemed as proper service.

'That on the application of plaintiffs/applicants' counsel time is hereby abridged to seven (7) days within which the respondents are to file their processes i.e counter affidavit and written address if any from the date of the publication in the newspaper.

'It is hereby ordered that the status quo ante bellum as at 23 April, 2014 be maintained pending the hearing and determination of the motion on notice.

'That respondents are to show cause why reliefs 4, 5, 6 and 7 on the face of the motion paper should not be granted.

'That this suit will be adjourned to May 4, 2015 for hearing of the motion on notice.'