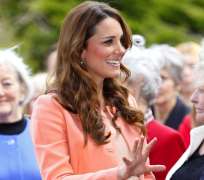 The Duchess of Cambridge has given birth to a girl, Kensington Palace has announced.

The Duke of Cambridge was also present for the birth of the couple’s second child, who weighed in at 8lbs 3oz.

Both mother and baby are “doing well”, the palace said.

The Duchess gave birth just after 8.30am and the delay between then and an announcement just after 11.15am is understood to have been so the couple could tell their families.

The Queen, Duke of Edinburgh, Prince of Wales, Duchess of Cornwall and the baby’s uncle Prince Harry had been informed and are “delighted” with the news, the palace said.

Kate was a number of days overdue and had been taken to the Lindo wing of St Mary’s Hospital at 6am from her nearby home Kensington Palace.

The birth of a girl will have been a surprise to the royal couple, who had chosen not to find out the sex of their baby in advance.

The Prince of Wales, however, will be overjoyed as he made no secret he wanted his second grandchild to be a girl.

Prime Minister David Cameron led the congratulations to the Duke and Duchess of Cambridge on the birth their new daughter, writing on Twitter that he is “absolutely delighted for them”.

The princess is fourth in line to the throne, the Queen’s fifth great-grandchild and a spare to the heir – and Prince George’s sister.

Her name is yet to be announced but the favourites include Alice, the name of one of Queen Victoria’s daughters and also of the Duke of Edinburgh’s mother, and Charlotte – the feminine form of Charles – which may be chosen as a nod to William’s father, the Prince of Wales.

The princess is unlikely to ever be crowned sovereign, being seen as the “spare to the heir”, but she is the highest ranking female in line to the throne, following the Prince of Wales, the Duke of Cambridge and Prince George.

A girl has not been born this high up the line of succession for nearly 65 years.

Prince Harry has shifted down the line of succession to fifth place, but has previously proved quite happy with this.

When it was suggested to him after Kate’s pregnancy was announced that this further reduced his chances of being king, he laughed and replied: “Great!”