Girl, 15, Slaughtered By Butchers At Community Abattoir In Imo State After Exotic Rapping 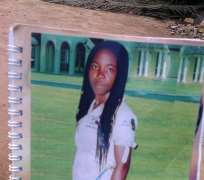 The date; Sunday, April 19th 2015 may hardly be forgotten in the history of Aboh Mbise Local Government Area of Imo State following the gruesome murder of a-15 year old Miss Odinakachukwu Andrew by unknown butchers at a local slaughter house in Umunne Ato autonomous community in Eziala Ngulu.

Odinakachukwu was allegedly abducted from their house located beside Aboh Mbise Divisonal Police Office at exactly 3:12 a.m on that fateful day and was slaughtered as a cow in the community abattoir which shares boundary with the said house and police station.

News48hrs.blogspot.com learnt that the deceased just finished from Casita Maria Secondary School, and enrolled for GCE at Ikwuado Secondary School, although she reside with her mother at a rented apartment in her maternal village, Umunne Ato, Eziala Ngulu, due to family crises that separated her parents for the mean time. Her father hails from Irunato Umunam.

According to our sources, while about 7 masked armed men invaded the compound and forced open with Chinese-karat, the door of the room where Odinakachukwu and her siblings and mother were sleeping, some drew the Late girl outdoor even as others waited to rape her mother.

"When they eventually forced selves into the room, they demanded for Odinakachukwu, pointing their guns on her mother... As the girl was found where she lay in the bed enjoying early morning sleep, they drew her by hair out of the house, with beating of gun booths all over her body. But others remained indoor and raped the mother. While leaving, they shot sporadically on the air to scare people away from the scene because both the girl and her mother were shouting", our source said.

But when contacted, the mother (name withheld) who is currently suffering from partial stroke she sustained from the incident, managed to deny ever been raped, and claimed rather that the hoodlums hit her mercilessly with their gun booths.

Thereafter, our source added, the cries of Odinakachukwu and lights beaming from the torchlight of the miscreants followed the footpath leading to the community abattoir.

News48hrs.blogspot.com further learnt that the corpse of the late girl was later recovered from the abattoir, around 8a.m same day, by the Nigerian Police Officers after being informed by a-member of Neighbourhood Watch, an Imo State local community vigilante.

Although our source who promised to provide us with the pictures of the girl’s corpse were yet to provide them till date, our reporter reliably gathered that the girl’s skull and some other vital parts of women folk were unseen at the time of recovering her from the abattoir.

When visited twice, our reporter was told that the DPO of Aboh Mbise Divisional Police Office was not unseat to comment. However, the officers met on duty further directed our reporter to the Imo State Police Area Command at Owerri, which he did went but could not get useful information as well because the relevant authority therein to comment were absent when news48hrs.blogspot.com arrived.

Confirming the incident, the Traditional Ruler of Umunne Ato autonomous community, Eziala Ngulu, Aboh Mbise, Eze Leo Nkwocha (Eze Ochako Arugwu 1), lamented that the ugly incident could have been averted if there was enough security men and security gadgets to man all the nooks and crannies of the community.

His words: “We have neither adequate security men nor security gadgets to man every nooks and crannies of the community. If not we could have forestalled the crime. You know that one person cannot be everywhere…But I am surprised because as usual, I patrolled on that day without hearing about any crime only to receive shocking news in the morning. For ten years I ascended throne as a monarch of this community, this kind of heinous crime has never happen.”

HRH Nkwocha, however, noted that two people directly connected to the girl have been arrested to help the police for further investigation, stressing that all is on the way to bring the culprits to book.

A-check by news48hrs.blogspot.com showed that one of the suspects currently in the police net is the late Odinanachukwu’s boyfriend, whose name could not be ascertained at the time of filing this report.

According to the mother of Late Odinakachukwu, who spoke unconsciously, Odinaka’s boyfriend took her late daughter away from home and co-habitated with her for over two weeks before she was able to locate them and bring Odinaka back, then, directed the young man to meet the girl’s father for necessary action. However, Odinaka was murdered three days after returning home.

The relationship between the living Romeo and slaughtered Juliet, news48hrs.blogspot.com further learnt was initiated by a girl of 20+, Miss Ugoma of Uranta, who lived with her parents in the same apartments of four rooms.

Miss Ugoma, our reporter gathered, had been away from the house for almost a month to the ugly occurrence, although she allegedly sneaks home to see her mother every night. However, Ugoma’s mother was said to have told the Police that she knew not the whereabouts of her daughter.

When our reporter visited the scene of the incidence, no single soul was found as all the occupants had deserted it including Odinakachukwu’s mother, who now live in another village away from her former resident.