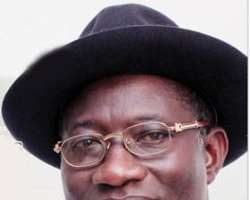 Acting President, Goodluck Jonathan
The newly reconstituted Federal Executive Council had its maiden meeting in Abuja on Wednesday with ministers warned to comply strictly with the public service code of conduct and due process.

The Head of Service of the Federation, Mr. Steve Oronsaye, who made this known to journalists after the meeting, disclosed that Acting President Goodluck Jonathan directed that the ministers be educated on the rules and regulations guiding conduct in public office and other processes of government.

Acccording to Oronsaye, the directive was to avoid infractions on the code and due process by the ministers, most of whom are new cabinet members.

'What is important is to have the courage to do what is right if somebody errs. It is for them (ministers, ministers of state, directors, etc.) to make a formal report instead of covering such a person up. Where they do not make a formal report, then such wrong will remain covered.

'So, anyone who errs, provided it is reported, the appropriate penalty prescribed will be applied.'

Oronsaye, who put the ministers through on the rules and regulations, noted that the orientation was necessary because some of the ministers might have come into the government with certain perceptions and expectations.

He, however, did not say the aspects of the code that were read out to the new ministers.

The HOS said, 'The code of conduct is the same for everybody; what we did was to bring out certain rules and regulations to their attention and we advised that they should be conversant with these rules and regulations because the permanent secretaries who are the accounting officers will always play by the rules.

'You will find that if you come with a certain perception or expectation that are different from what you meet on the ground, you will be constrained by the rules and regulations and you will be frustrated.'

Oronsaye also reacted to reports that some ministries have both the permanent secretaries and ministers coming from the same states, or geo-political zones.

Although he noted that the law did not proscribe such arrangements, he said that the principle of federal character had to be maintained.

'Of course, we recognise the principles of federal character. All of these will be taken into consideration, but at this point in time I am not thinking of that because ministers have to settle down fast.'

The orientation of the ministers on the fundamentals of governance also included due process or procurement laws and how to avoid or resolve disputes between substantive ministers and ministers of state.

He said, 'Basically, a presentation on the BBP Act was to bring the cabinet members at par with a view to facilitating budget implementation.

'The bottom line is budget implementation; because most of them (ministers) are new, it becomes necessary to educate them.

'When people blame the BPP Act for poor implementation of the budget, it shows lack of understanding. Due process doesn't delay anything.'

It was learnt that Eze's presentation was to guard against the prevailing situation where ministers and other heads of government agencies blamed the procurement process for delays in the preparation of contracts and poor implementation of budgets.

Another reason, according to a source in the Presidency, was to check the rate of corruption in the public service.

No fewer than four ministers were relieved of their portfolios and prosecuted over alleged corruption during the administration of former President Olusegun Obasanjo.

Also speaking with the journalists, the Minister of Information, Prof. Akunyili, said that issues concerning reported disputes between substantive ministers and the ministers of state were also raised and addressed at the meeting.

Akunyili admitted that the disputes were real, but noted that they were caused by individuals, and not posts or positions.

She said, 'The relationship between ministers and ministers of state came up during the discussion because it is a very important factor in ensuring that we work amicably to ensure that we deliver the dividends of democracy to the good people of this country, but I want us to know remember that this problem actually depends on individuals.

'They are not created per say by the job; they are created by individuals and, as such, when individuals decide to work with one another as a family knowing that they are working for the same people, the same government, the same country, friction shouldn't really arise.

'So we believe that this time around, those differences that were noticed would be sorted out since we have started the discussions today. In the future we are going to come up with more details.'

She also reacted to her reappointment as Minister of Information and Communication, noting that she had no regrets over the development.

Rather, Akunyili explained that information management was a strategic and crucial assignment in the government, and that her retention in the post indicated that the Acting President was impressed by her previous efforts.

'I am very grateful to the Acting President, and the good people of Nigeria,' she said.

Acting President Goodluck Jonathan presided over the meeting which lasted for about three hours at the council chambers in the Presidential Villa.