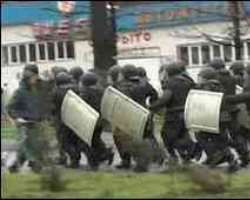 There are reports that police fired live rounds at the demonstrators after failing to disperse them with tear gas and stun grenades.

Protesters in several parts of the country are calling for the president to resign over rising fuel prices.

Russia and the US, which have military bases in Kyrgyzstan, appealed for calm.

The clashes in Bishkek come a day after thousands of people stormed government offices in the north-western town of Talas.

Government offices in another town, Naryn, have also been seized by opposition supporters.

President Kurmanbek Bakiyev has declared a state of emergency and imposed customs in Bishkek, Talas and Naryn.

Leaders arrested
Witnesses said at least four bodies were on the ground in the square outside the president's office and a medical official told Reuters news agency that several people had been killed and dozens injured, mostly from firearms. AT THE SCENE

Rayhan Demytrie, BBC News, Bishkek
We've been to the square where the demonstrations were taking place – the situation is very chaotic.

There are thousands of people there, mainly young men, and lots of them have arrived from different parts of Kyrgyzstan.

They are very angry and it was very noisy, the police were firing stun grenades and also live rounds. We saw people who had been shot – one man walked past me, he had been shot in the hand.

We seemed to be the only camera there – and the protesters wanted us to see the people who had been killed. We saw at least one dead man.

All this has angered the protesters even further – they say they won't go anywhere and were shouting “the president must go”.

The protesters in Bishkek appeared to be leaderless, says the BBC's Rayhan Demytrie in the capital, after a number of opposition heads were arrested overnight.

Earlier, police had used tear gas and stun grenades to break up crowds outside an opposition headquarters but the protesters overcame the police and marched to the presidential offices in the city centre.

Police cars have been overturned and set alight and officers attacked by the crowd, some of whom are reported to be armed.

The unrest began on Tuesday in Talas, where protesters briefly took the local governor hostage while another group surrounded the local police headquarters.

Prime Minister Daniyar Usenov said at least 85 people were injured in the unrest – most of the injured were reported to be police officers.

Protests spread on Wednesday to Bishkek and Naryn.

Thousands of people occupied a government building in Naryn and have installed what they are calling a “people's governor”.

The protests have been touched off by rising fuel prices, but the opposition has also accused President Bakiyev of economic mismanagement and failing to tackle corruption. KYRGYZSTAN FACTS

Kurmanbek Bakiyev has been president since the Tulip Revolution of 2005, which overthrew the government of Askar Akayev

The most popular opposition leader, Almazbek Atambayev, and several other politicians have been arrested and journalists attacked, adding to the tensions in the country, says our correspondent.

In a statement, the US embassy in Bishkek said it would call on “all parties to show respect for the rule of law and call on both the demonstrators and the government to engage in talks to resolve differences in a peaceful, orderly and legal manner”.

The US base in Manas, near Bishkek, is a key resupply hub for the operations in Afghanistan.

Russia's Foreign Minister Grigory Karasin has urged the authorities not to use force against demonstrators, the Interfax news agency reported.

Web blocked
In recent weeks, the authorities have clamped down on independent media, and several internet news sources are still blocked in the country.