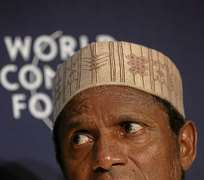 Fresh facts emerging suggest that President Umaru Yar'Adua may not return to Nigeria soon, based on the instructions of his medical minders, Vanguard can authoritatively reveal. The original plan, according to impeccable sources, was to

arrange his return to the country before the New Year. If that plan had been carried out, he would have taken a bed rest till the second week in January when, according to expectations, strong enough to resume work.

Vanguard also gathered that only two individuals have unfettered access to President Yar'Adua—his wife, Turai, and his Aide-de-Camp, ADC. In fact, Turai, according to the sources, had insisted that he be allowed to recover fully before getting involved in state matters or politics.

Details of his health condition, according to reliable sources, indicated that though Yar'Adua may be recovering, his medical menders at the King Faisal Medical Centre in Saudi Arabia are not about to let him leave.

Doctors fear for Yar'Adua
Vanguard was reliably informed that one of the planks on which they based their decision is that discharging Yar'Adua now may be counter-productive.

Sensing that any return of Yar'Adua to the country now would further place him under immense stress as a result of visits from personalities who would wish to see him — upon his return to the country – his minders have insisted that he should recover fully before being allowed back into the country.

Vice-President Goodluck Jonathan and some of the ministers, Vanguard learnt, are aware of the development.

What, perhaps, has made this line of action attractive to Turai and a few other individuals considered very close to Mr. President, according to a source close to the family and who spoke on telephone from Saudi Arabia late Sunday night, “is that this time of the year witnesses little or no real government activities.

''This is a time of the year when businesses are winding down and so it would not really make any impact if President Yar'Adua returns now.

“The truth of the matter though is that should President Yar'Adua return to Nigeria today, it would reduce the political temperature and put some ill-wishers to shame.

Yar'Adua's return'll reduce tension
“But, I must tell you, this is not about putting any individual or group of individuals to shame; it is about the health of the President of the Federal Republic of Nigeria.

“What is paramount is for Mr. President to recover and recover fully so that he would not need to rush back here (Saudi Arabia) or any other place again. “We thank God Almighty that he is responding well to treatment and the prognosis is that all is getting better.

“That is the major reason why the doctors here (Saudi Arabia) are insisting that he should recover well before coming back home.

No return date yet

“For somebody who has gone through such a rigorous medical treatment, putting him through the rigours of a flight back to Nigeria now is not in the picture at all.

“And, as I said earlier, serious activities in government and the private sector would not really pick up until towards the end of January. That would have bought a lot of time for the President. He needs the time.”

What, however, the source refused to disclose was the time line for the President to return to Nigeria.

Pressed very hard, the source insisted on not giving any specific time line as to the return of President Yar'Adua.

His reason, Vanguard gathered, may not be unconnected with earlier projections about Yar'Adua's return to the country which had been botched. Meanwhile, Vice-President Jonathan is said to be constantly in touch with the First Lady and the President's ADC.