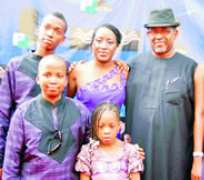 IT was a bash befitting a king on Saturday, March 27, when Lagos socialites trooped out to celebrate with TV guru, Patrick Doyle, on his 50th birthday.

The birthday-boy, who was looking very happy, was joined by his wife, the TV host of Oge on STV,
The party, which was described as a big one, had its second leg at the Doyles' private home in Lagos.