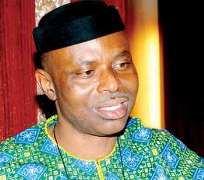 Ondo State Governor Olusegun Mimiko has approved the payment of N866m to former political office holders that served in the 18 local government councils in the state between 1999 and 2007.

The Commissioner for Special Duties, Local Government and Chieftaincy Affairs in the state, Mr. Niran Sule-Akinsuyi, who stated this at a news conference on Thursday, said the decison was ratified at the state's weekly executive council meeting held on Wednesday.

Sule-Akinsuyi, who addressed journalists in company with his counterparts in the Ministry Information, Mr. Ranti Akerele, and that of physical planning and urban development, Mr. Sikiru Basaru, said the payment would begin next week, and that it would be in five tranches.

He also explained that chairmen, their deputies, councilors and supervisors, who served within the period, not minding their political affiliations, would benefit from the largesse.

He said, 'All political office holders in all the 18 local councils in the state during the administration of the late Chief Adebayo Adefarati from 1999 to 2003 to that of Dr. Olusegun Agagu from 2003 to 2007, will benefit and there will be no discrimination in the payment.'

Basaru also told journalists that the governor had approved N70m as housing loans for all categories of civil servants in the state and that N17.5m of the amount had been released to his ministry for immediate disbursement to the first batch of beneficiaries.

The commissioner noted that the problem of housing confronting public servants in the state became a major challenge to the current administration in the state because previous governments failed to do something to address it.

He said, 'No administration in the state in the last 34 years had seriously tackle the problem of housing confronting public workers in the state. Even the immediate past administration of Dr. Olusegun Agagu only approved N1.4m during its time.'

Basaru, who said a committee that would disburse the fund would soon be inaugurated, added that the state government planned to spend N604m this year to construct low cost housing estates for interested residents of the state.

He said the estates, which will comprise of 454 housing units and constructed on 302 plots, would be handled by the state housing corporation.

The commissioner also explained that four estate developers had been approved by the state government to build the houses.