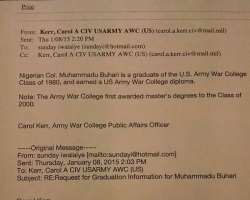 The U.S War college has affirmed that the All Progressive Congress, APC,

Presidential Candidate, General Mohammadu Buhari earned a Diploma from its

that Buhari was a 1980 Graduate of the institution.

It is not clear if such Diploma awarded for a short courses in the U.S War

to complete.
The controversy surrounding General Buhari's credentials submitted to the

credentials.
Buhari had through his affidavit stated that the originals of his academic

records to show if it is indeed an equivalent of a school certificate.