Politics is all about lying, nothing more, says Niger governor 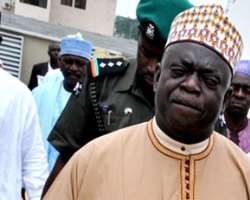 The Niger State Governor Muazu Babangida Aliyu, has declared that politics is all about lying and if one cannot lie, then he or she has no place in the game, adding that there is no morality in politics.

Aliyu,  who stated this while inaugurating Peoples Democratic Party (PDP) gubernatorial campaign committee, affirmed that it would win the 2015 polls at all levels because it had a sellable candidate. 'If you cannot lie, get out of politics. Anything you are involved in has its own rule. You are in politics to win, win first and let other things follow. Don't be the one crying louder; lest you will be the one â€Žthey will take to court.

'If you are talking of honesty or morals, go and become an Imam or pastor. Politics cannot be the way it used to be. The challenges are more now, the variables have changed, the issues that we are going to face in 2015 are different from the ones  we faced in 1999 and we must bear this in mind.

'Our society is not as grateful as it used to be, the values and morals have gone down. If you want to win, use the modern morality.

Aliyu directed that no stone should be left unturned to ensure that all the PDP's  candidates from the House of Assembly to the Presidency become victorious in the elections.

'We should go from house to house, neighbour to neighbour, room to room to ensure we win the election. We have to do it that way for us to get somewhere.

“Don’t allow yourselves to be intimidated by anybody especially the opposition party. Once you enter a project with fear you are bound to fail.

The governor also directed all political appointees who could not make the membership of the campaign committees to consider themselves as mobilisers for the PDP candidates.

He warned that they would be held accountable in the event of failure in any polling unit and that any of the appointees who did not want to work for the party should resign his or her position.

He challenged all members of the campaign committees as well as the political appointees to ensure the party supporters at the grassroots were carried along in their activities.

He added: 'Our party must reinvigorate, we must consult officers of the PDP at all levels, we should work assiduously to ensure total victory.'

On the governorship candidate of the party, Umar Mohammed Nasko, Aliyu described him as the best to happen to the state especially because he was a youth, asking the electorate to queue behind him.

Speaking on behalf of the committee, its  Director General, Alhaji Aminu Yussuf who is also  the state's secretary of the party, assured the PDP of total victory in the February election.

Yussuf said the party would change its tactics and strategy in areas where traditionally it had had problems in previous elections.