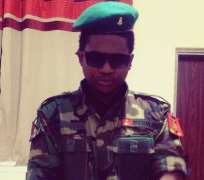 Where could once desciplined Nigeria be? A Nigeria where custom and tradition are well respected. A Nigeria where the National anthem is always the pride of the nation. But today, looks as if everything goes in Nigeria without anyone caring about the situation.

When entertainers are suppose to help build the country, some are helping to mock the country and long time hip hop singer who has been trying to stage a strong come back into the Nigerian music scene, Danny Young, has joined the list of artistes mocking the country especially the Nigerian military.

The singer took the Nigerian Army uniform of his friend to wear which is actually wrong for a civilian to wear the uniform.

According to the news reports, the Nigerian Army, in a statement dated 21st January 2014 and circulated earlier that week, expressed its displeasure with the Nigerian celebrities who wear the military gear – strictly meant for military personnel – in music videos, photo-shoots and concerts. The statement read in part:

Section 109 of the Criminal Code provides:

109. Any person who, not being a person serving in the armed forces of Nigeria nor a member of the police forces, and with intent that he may be taken to be such a person or member as aforesaid-

(a) wears any part of the uniform of, or

(b) wears any garb resembling any part of the uniform of, a person serving in the armed forces of Nigeria, or a member of the police forces, is guilty of a misdemeanour and is liable to imprisonment for one year.