ATTORNEY GENERAL/MINISTER OF JUSTICE BIFURCATION IS THE ANSWER 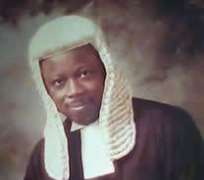 It has come to my notice that some of our eminent jurists and distinguished legal practitioners have exhumed discussion on this thorny issue of AttorneyGeneral/Minister of Justice, the position which by our inherited tradition we kept merging together on an incumbent. As someone who had passed through the ordeal, I think the time has come to separate the two positions so that the Minister of Justice serving a particular Government is not enyoked with the service of the Attorney General of the entire Federation of Nigeria. I personally suffered the ordeal of wearing these two hats during the year that I served in that office or should I say offices.

It so happened, that once I reviewed the case of a particular gentleman serving as one of the ministers in our cabinet and I reached an objective decision that he should be prosecuted for an allegation of bribery and corruption. This I decided to do not as the Minister of Justice to the Government but as the Attorney General of the Federation. Although the gentleman was discharged and acquitted, many members of our cabinet not only frowned at it but even castigated me for taking such an action, particularly because I did not bring the matter before the cabinet. I made them to understand that by the power conferred on me singularly under the constitution, I was not expected to consult the cabinet before taking the action. Myduty as the Attorney – General of the Federation was well spelt out in the constitution.

Section 138 of the then applicable constitution of the Federal Government of Nigeria of 1979, in particular sub section 1 is the merger that states “there shall be an Attorney General of the Federation who shall be the Minister of the Government of the Federation” but the extra-ordinary power of the same Attorney General is contained in section 160, paragraph 2 and 3, thus empowering him “to institute and undertake criminal proceeding against any person before any court in Nigeria” and this is a power he could exercise in person or through one of his officers. But the overall importance of these powers are contained in section 160,paragraph 3 which states “in exercising his power under this section, the Attorney General shall have regard to the public interest, the interests of justice and the need to prevent abuse of legal process”.

Important debate on this issue surfaced in the year 2005 at the Political Reform Conference established principally to amend the constitution of the country. At the end of the plenary session of that conference, many committees were set up to look into various issues as contained in the constitution. I was appointed to head the Judicature and Legal Matters committee, where many of our eminent jurists and distinguished legal practitioners as members. A.A. Yola Esq, the Solicitor General,was appointed as our secretary who is still in possession of the compendium ofdocuments of our deliberations, reports and recommendations. We reached a decision that the office of the Attorney General should be separated from that of the Minister of Justice. We came to the conclusion also that the office of the Attorney General must be occupied by someone independent, incorruptible and alegal jurist of high integrity.

Even in the United Kingdom where we tried to follow their English Legal System,it has the post of the Lord Chancellor as distinct from that of the Secretary of State for Justice with their respective independent functions.

The time has come when someone who is not a politician, but of sound legal mind, that could act as an Ombudsman, (which is the practice in some Scandinavian countries in Europe), should be invited to take up the position as Attorney-Generalsimpliciter, in the public interest and in the interest of justice, equity and the need to prevent corruption and abuse of legal process.