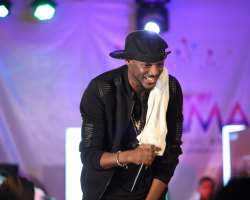 Two of the best out of Africa, have been announced by the International Committee of All Africa Music, AFRIMA, to host the 2014 edition of the AFRIMA awards. They are Democratic Republic of Congo “French speaking hottest” female broadcaster and music presenter, Madinga Sona Maria and Nigerian legendary contemporary music star, 2Face Idibia. The two are the co-host of AFRIMA award ceremony holding in Lagos Nigeria on Saturday, December 27, 2014 at the prestigious grand ballroom of Oriental Hotel, Victoria Island, Lagos.

Speaking about the collaboration between the two popular hosts, Executive Producer, AFRIMA, Mr Mike Dada, said, “The award ceremony is going to be explosive with 2Face and Madinga Sona Maria, two accomplished creative Africans, holding sway and guiding our distinguished guests and nominees through the programme. We promise to bring to Africa electrifying performances from our nominees and invited guest performers. Then add this to the famous faces and glamour of the African icons on the first- of- its-kind red carpet activity…It is going to be a spectacular show!”

Mandinga Sona Maria is a beauty to behold with a towering height of 1.78m. Mandiga who looks every inch a model is the hottest female broadcaster in Kinshasa Democratic Republic of Congo. Her musical show, Cite de Star is the biggest music show in Democratic Republic of Congo. A combination of beauty and brain, Mandinga presents her musical show on Digital Congo Television and Radio. She is also a performer.

A truly home grown music star, 2Face Idibia is one of the most decorated and successful Afro pop artist in Africa. He is one of the most bankable artists in the continent. 2Face has received so many awards among which are MTV Europe Music Award, World Music Award, Headies Awards (Hip-hop award), Channel OMusic Video Awards, and BET award for his musical works, MTV Africa Music Awards, MOBO award, KORA award, and numerous additional nominations. 2Baba, the stage name 2Face recently adopted, started his musical career with the Plantashun Boyz and together the group recorded two successful albums, Body and Soul and Sold Out. He went solo in 2004 and came out with his first solo album titled Face to Face. His latest album was released this year titled The Ascension and it features other artistes across the continent.

On hosting 2014 AFRIMA 2Face expressed his excitement when he said, “I am happy to be part of this history making event. I am delighted to host Africa, Africa is the future. I welcome Africa and the world to AFRIMA here in the beautiful city of Lagos, Nigeria. Let's celebrate Africa together! ”

With 2Face and Mandiga anchoring the event, combined with the grandeur of the Grand Ballroom of Oriental Hotel with an African ambience, truly AFRIMA is set to host Africa and the world.

In partnership with the African Union Commission, the 2014 All Africa Music Awards will be a festival style open concert of non-stop music, fanfare and fashion exhibition from countries across Africa and performances by African artistes.

AFRIMA is aimed at communicating the strength of Africa to the rest of the world for global competitiveness.

AFRIMA for hope, for celebration!