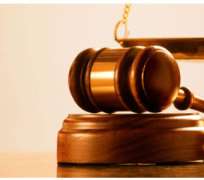 By Chibota Edozie
An Enugu State High Court presided over by Justice R. O. Odugu, on Tuesday, extended the order it earlier granted restraining a gubernatorial aspirant of the Peoples Democratic Party, PDP, in the state, Senator Ayogu Eze from parading himself as the Governorship candidate of the party.

Justice Odugu who granted the application by the Plaintiff/Applicant, Hon. Ifeanyi Ugwuanyi, who is the state Governorship candidate recognised by the party, adjourned the case to December 22 for further hearing.

The order also restrains the PDP from recognising or submitting any name other than that of Hon. Ugwuanyi as the PDP governoship candidate for the State.

At the resumed hearing of the case ,the Plaintiff/Applicant through his counsel, Mr. Ogochukwu Onyekwuluje, brought a motion on notice for interlocutory injunction against the defendants.

The court, however, granted the application that the processes be served on the 1st defendant by pasting same on the front entrance gate of his residence at No. 1 Ayogu Eze Close, Independence Layout, Enugu.

The 2nd Defendant's Counsel, P.H. Kylek, informed the Court that he had filed a Memorandum of Appearance in the matter and asked for an adjournment to enable him file other processes in response to the processes filed by the Plaintiff/Applicant.

Justice Odugu, however, granted the oral application made by the counsel to the Plaintiff, Mr. Onyekwuluje under Order 39 Rule 4 of High Court Rules of Enugu State 2006 requesting for the extension of lifespan of the Ex-parte Order, which was made in the suit on the 9th day of December, 2014, and was not opposed by the 2nddefendant's counsel.

The Court further ordered that a fresh copy of the Order should be drawn upon and enrolled for service on the 1st Defendant and thereafter adjourned the matter to December 22, 2014 for hearing of the substantive application by either the regular Court or vacation Court as the case may be, subject to the appropriate service of the processes on the 1st Defendant.

The court had in an ex-parte injunction granted on December 9, 2014 restrained Senator Eze from parading himself as the governorship candidate of the party pending the hearing and determination of a case filed in suit number E/499/2014 by the PDP governorship candidate for Enugu State, Hon. Ifeanyi Ugwuanyi.

It also restrained the PDP from recognising or submitting the name of any other person other than Hon. Ifeanyi Ugwuanyi as the party's gubernatorial candidate in Enugu State for the February 2015 general elections.

The order by Justice Odugu reads: 'The 1st Defendant/Respondent (Senator Ayogu Eze) by himself, his principals, agents, supporters or any other person howsoever called is hereby restrained from holding himself out and/or parading himself and/or allowing himself to be held out and/paraded as the gubernatorial candidate of the 2ndDefendant for the February 2015 general election in Enugu State pending the determination of the Motion on Notice already filed in this suit/ .

It would be recalled that Senator Ayogu Eze had in a statement issued on Tuesday, December 9, 2014, after the PDP governorship primary election claimed he was the duly elected candidate of the PDP.