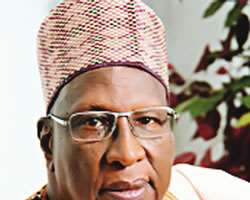 For having the temerity to seek a return to his position as the National Chairman of the ruling Peoples Democratic Party (PDP) through the law court, members of the National Working Committee of the party have suspended Alhaji Bamanga Tukur for one month. The NWC took the decision to suspend Tukur from the party at its meeting in Abuja on Thursday. The meeting was presided over by the embattled Acting National Chairman of the party, Alhaji Adamu Mu'azu.

The National Legal Adviser, Victor Kwon, in a statement issued yesterday in Abuja, premised the decision to suspend Tukur  and another  member of the party, Aliyu Buba Gurin, on a suit, asking a Federal High Court, Abuja to remove the incumbent National Chairman, Adamu Mu'azu and restore him as chairman of the ruling party.

Tukur had submitted, like the plaintiff before Justice Evoh Chukwu that his resignation from office on January 15, 2014 did not comply with provisions of the party's constitution which required that a 30-day pre-resignation notice be given the National Executive Committee (NEC).

But ruling on the suit on Tuesday, Justice Chukwu dismissed it, describing the case as an abuse of court process.

In the statement announcing Tukur's suspension, the PDP noted that Tukur and Gurin did not explore the internal mechanism of the ruling party for conflict resolution and submitted that the recourse to litigation was an infraction on its constitution.

The statement also stressed that Tukur had been referred to the party's national disciplinary committee.

The statement reads in part: 'The National Working Committee of the Peoples Democratic (PDP) at its 395th meeting held yesterday, December 3, 2014, reviewed recent national developments as they affect the party.

'The NWC reasoned that for instituting a claim and counter-claim in suit FHC/ABJ /821/2014; Gurin vs PDP & three others without first exploring and exhausting the party's internal mechanism of redress and for attempting to stop the forthcoming National Convention to nominate the party's presidential candidate as well as regularize the position of the National Chairman and other members of the National Working Committee is unacceptable.

'The NWC hereby suspends Dr. Bamanga Tukur and Aliyu Abuba Gurin for one month and refers them to the National Disciplinary Committee for infringing on section 58(1)(a)( b)( h)( l) of the PDP Constitution 2012(as amended)'

Checks revealed that Section 58(1) of the PDP 2012 Constitution (as amended) which the party relied on to reprimand Tukur reads:

'Subject to the provisions of this constitution, the party shall have power to discipline any member who:

• Commits any breach of the party's constitution, and or manifesto;

• Says or does anything likely to bring the party into disrepute, hatred or contempt;

• Disobeys or neglects to carry out lawful directives of the party or any organ or officer of the party;

• Engages in dishonest practices, defrauds the party, its members or officials;

• Is persistently absent from meetings or other official duties;

• Engages in anti-party activities;
• Engages in disorderly conduct at meetings or rallies or at any party function;

• Engages in any conduct likely to cause disaffection among members of the party or is likely to disrupt the peaceful, lawful and efficient conduct of the business of the party; and

Reacting, Tukur claimed that he did not  institute any court case against Mu'azu and noted that he was only joined to a suit instituted  by Gurin.

Tukur's statement which was made available  by his  Special Assistant on Media, Oliver Opara, reads:

'It has come to the notice of the Special Assistant on Media to Alhaji Bamanga Tukur, the mis-representation of facts bothering on the case instituted against the National Chairman of PDP and three others by a member of the Party Alhaji Aliyu Buba Gurin.

'It must be put forward in its proper legal and historical perspective that Alhaji (Dr.) Bamanga Tukur never initiated nor filed any case against Alhaji Adamu Muazu contrary to reports making headlines in national dailies and waves in social media.

'The wrongful report and misrepresentation of facts to the effect that Alhaji Bamanga Tukur filed a case urging the court to oust Alhaji Adamu Muazu out of office as National Chairman of the PDP is not only untrue but gross distortion of facts relating to the case instituted and filed by Alhaji Aliyu Gurin.

'Alhaji Bamanga Tukur was joined in the suit as a co-defendant and as is required in law filed his own counter-affidavits stating his own side of the case in relation to the suit filed by the plaintiff, Alhaji Aliyu Buba Gurin.

'A co-defendant in a case cannot by any imagination in law be deemed as a plantiff who initiated and filed a suit before a law court.

'Let it be also noted that at no time did Alhaji Bamanga Tukur react to the court judgment and did not inform any reporter or journalist as being erroneously reported that he 'has vowed to challenge the judgment at the Court of   Appeal.

'The important legal argument hereinafter is how can a co-defendant who was also sued in a case by the plaintiff vow to challenge the judgment of a case he did not institute on appeal.

'For avoidance of doubt, this case was instituted by Alhaji Aliyu Buba Gurin, a PDP member against PDP, Alhaji Bamanga Tukur, Alhaji Adamu Muazu and INEC as one to four defendants.' - The Sun.