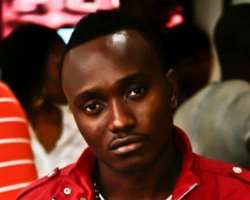 Though former Chocolate City record label artiste, Brymo, never mentioned anybody's name in his social media post, but smart readers will be able to deduce that he was making reference to fellow rave of the moment, Flavour, who announced that his new album 'Thankful' sold over #1million copies in the first five days of its release.

Brymo, took to his social media page to mock the viral reports wondering how possible that can be. “The records are selling in the millions again, the lies are heaping again!!”

After tweeting his deep thought message, the singer had a change of mind and apologized. “It's cool, am deeply sorry. Nobody send me, I'll let it be.”

Still not being able to hold his dissatisfaction, the singer stated that one of these days, he will push someone to the wall.

“One of these days I'll push you to the wall and you'll be forced to strike. When the time arrives, think. Am only concerned for us all.”

“And it's not alright if the industry prefers to be how it is, but if no one will listen in private then we must speak in public!”

“Better yet mind my business and take your advice.”