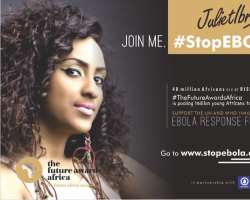 The #StopEbola campaign is aimed at saving the 40 million Africans who are at risk by creating awareness and raising funds through direct fans of selected celebrities. Therefore, Juliet is expected to educate her followers on social media about Ebola.

According to the organizers, all donations will be channeled to the United Nations Ebola Responds Fund.

In an exclusive interview, her project manager reveals: “Before the #StopEbola campaign, the Juliet Ibrahim brand released an awareness song on Ebola gaining recognition from the Rigimed and D.med Healthcare in Germany and South Africa respectively. And as we speak, the company is willing to partner with the Juliet Ibrahim Foundation. So you see, educating her fans about Ebola is nothing new to her social media handles.”