Synagogue: The collapse after

By Gboyega Alaka - The Nation 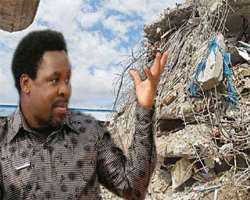 Following the collapse of the accommodation building at the Synagogue Church of All Nations, traders and business owners whose livelihood depends almost entirely on the activities of the church have been groaning and lamenting their collapsing fortunes. Gboyega Alaka who recently visited the formerly bustling area reports.

ALMOST opposite the Synagogue Church of All Nations and right in heart of the little Bolounpelu community, near Ikotun, which incidentally plays host to the now controversial church, is a four-storey hotel facility fast nearing completion. The owner obviously had bought-out an old property and embarked on a total reconstruction for hotel purposes, seeing its closeness to the internationally renowned church and the increasing opportunities for hospitality business. In recent years, the church had begun to attract a large number of religious tourists and miracle seekers, who regularly throng the area.

Naturally, there had also been an immediate need for accommodation, which business-minded Nigerians have responded to. A reliable source in the area revealed that the owner of the property in question had bought the property about two years ago at a price in the region of N10 million. Sometimes around June, he pulled down the old structure and began constructing a massive foundation, which immediately indicated it was going to be a massive structure-at least by the community's standard. He was about to commence the building proper, when the Synagogue church disaster, which saw the collapse of a six storey accommodation facility and claimed scores of lives right inside the church premises occurred.

Nevertheless, he went ahead with the construction, and has within a spate of two months erected three floors right up to roofing stage. If he has any fear that the disaster will affect his projected business, the speed of the construction has not shown anything.

Anxiety has, however, continued to mount around the community by those already into the business of accommodation. They fear this whole construction might just be a wasted venture. According to Segun, a resident of the community, who has witnessed the transformation in the community, a lot of people are already wondering what would become the fate of this particular hotel and several others that have been established in the area in the last three, four years.

He explained that “As I speak, I can count close to ten of such hotels, including Isu Hotel, Delta Lodge, Souvenir Hotel, Victory Hotel and several others without names, that have sprung up in this area in the last three or four years. But while they have had their time of boom, the recent tragedy at the Synagogue church has affected virtually all businesses attached to it. In fact I can tell you that it is the hoteliers that are lamenting the most, because they definitely are yet to recoup the huge funds they have invested. ”

He also explained how several of the operators now complain endlessly of poor patronage. He also said many of the scouts, who used to greet visitors on arrival and market accommodation facilities of various grades to them have all but disappeared, saying that more or less sum up the situation.

Indeed, the scenario, where all luggage-carrying arrivals to the Synagogue bus stop are besieged by hordes of accommodation scouts, is fast disappearing. Again, Segun disclosed that most of them are fast disappearing because business is low.

One of them, Chinwe corroborated his claim, saying most of them are “beginning to look for other means of income, because of the impact of the building collapse.” She explained that in days leading to major church programmes and events, a hard-working scout made as much as N30,000 or more in a week, but admit that such is no longer the case.

Another scout, who refused to grant a direct interview interjected that the situation is now so tough that they sometimes resort to fighting each other over potential clients; something he said was never the case in the past.

Chinwe is therefore earnestly praying that the court case against the church overseer, TB Joshua on account of the collapse is resolved in his favour and the 'man of God' settles down to his anointed business again. Anything short of this, she says, will be disastrous for hundreds of people, whom she says feed off the prosperity of the church. In her words, “Look at these shops; all the canteens and hotels, do you think they are happy at the situation? See how empty they are. If they successfully pin the collapse of the church on the 'man of God' and kill the church, all these people, including myself will suffer. We have no other means of survival as I speak”, she trailed off.

One of the staff at Isu Hotel, situated close to the church, who begged for anonymity, corroborated the lamentations of low sales, saying that patronage has dropped to a near zero stage. She also said this is not peculiar to just one hotel, as virtually all of them are singing the same tune. She lamented that people no longer come from afar or outside the country, adding that those are the people who are able to afford the hotels.

Away from the accommodation scouts, a mild drama played out as this writer moved nearer the shops and rows of canteens opposite the church to further feel the pulse of the traders. A buxom woman who ran a canteen on the street opposite the church ran out to meet a group of people calling out to them to come into her canteen and promising handsome discount, known in local parlance as 'fisi'. As if taking a cue from their boss, her two attendants, a boy and a girl ran after them and literally dragged them into the canteen. In a jiffy, another canteen operator next to hers came out charging and accusing her of snatching her customers, until a third party interceded.

One of them lamented that the whole hullabaloo is all because of the problem the church is facing on account of the collapsed building, adding that fighting over customers was unheard of prior to the incident. She whispered to this writer that the whole place used to be a beehive of activities even past midnight, but says shops now shut down even before 12 midnight.

Mrs. Adams, a grandmother in her late 60s, who runs a little restaurant on Olusesi Street, near the church spoke of how the unfortunate incident has torpedoed commercial activities in the area. She lamented the huge investment most of the hotel owners have made and how visitors no longer come in from outside the country. She revealed that the last time the church witnessed huge crowd was the weekend after the collapse and said it was due to the fact that the members wanted to show their solidarity. Besides, she said the church was billed to have a programme that weekend; hence people had begun to troop in. She added that this must be the reason the collapse also had so many casualties.

Another woman, Mrs. Adewale, whose husband runs an informal accommodation, said “the incident has no doubt no doubt affected the lodging business. Yes, people still come around, but it is dropping by the day. She also says that prices have since crashed. Her husband used to let the two rooms out for between N3,000 and N2,500, but says they are ready to even accept N1,500 at the moment, just so that their steam of cash earning does not totally stop. All they are hoping for now, she said is for the prophet to be cleared of all allegations, so that normalcy could return and things can get back to normal. As if to justify her plea, Mrs. Adewale asked almost rhetorically, “Why can Nigerians just face the issue. We all saw the plane hover several times before the collapse. How come the building had to collapse on the day the plane came hovering? Isn't it a very simple matter?”

Mrs. Adewale added that we are supposed to be supporting our rather than castigating him. She also cited the case of people who go on pilgrimage to Mecca and die, asking, “Have Saudi-Arabians condemned Mecca?

A six-storey building serving as lodging facility had collapsed inside the premises of the Synagogue Church of All Nations on September 12, killing scores of people, mostly of South African origin, who had travelled all the way to Nigeria to worship and participate in the church's periodical programmes. The hue and cry that accompanied the incident prompted the Lagos State government to set up a coroner's inquest headed by Magistrate Oyetade Komolafe on September 26, to investigate the cause of the building collapse.

Meanwhile, a Federal High Court in Lagos yesterday adjourned a suit seeking to stop the ongoing inquest into the collapse of the building till November 17. A Lagos lawyer and counsel to the church, Mr. Olukoya Ogungbeje had gone before the court on October 28, claiming that the composition of the Coroner's Court set-up was a negation of the principle of natural justice and section 36 of the constitution, and as such was unconstitutional and void.

The Lagos State government also last week gave approval for 54 bodies already confirmed to be of South African nationals to be flown back to South Africa. Out of the 70 bodies that have been scientifically verified through DNA, 54 were confirmed to be South Africans; while 16 others are of Nigerians, Togolese, Benenoise and others.

And as the inquest and the ensuing legal battle unfolds, the biggest prayer on the mind of the hundreds of people whose business depend on the church for survival remains, let the man of God be vindicated.