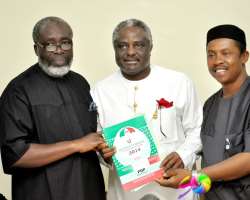 Ahead of the Peoples Democratic Party's(PDP) National Assembly primaries, Dr Chris Chigozirim Asoluka has returned his completed nomination and expression of interest forms to the leadership of the party.

Dr Asoluka who is gunning for the senatorial ticket of the PDP in Imo East(Owerri) senatorial district of Imo State dropped the hint yesterday while addressing supporters who were at the Sam Mbakwe International Cargo Airport, Owerri to receive him on arrival from Abuja, last Friday.

The former member of the House of Representatives disclosed that he returned the completed forms to the party leadership in Abuja in compliance with the party's guidelines for the 2015 general elections.

While thanking the mammoth crowd for their continued solidarity, the frontline senatorial hopeful revealed that a group of professionals who had implicit confidence in his ability to deliver procured the forms with their own money.

He explained that his decision to contest the senatorial election was spurred largely by the yearnings of the people of Owerri Zone for effective and result oriented representation at the Senate come 2015.

The ace federal legislator remarked that the stakes have changed dramatically and the quality of Senate of 2015 requires that Owerri senatorial district must send their best so that the area would not be missing in action in the hallowed Red Chambers.

Asoluka who served as the Chairman, Oil and Gas Free Zones Authority as well as elected World Free Trade Zones Convention Ambassador for West Africa and Central Africa maintained that it will take a candidate with character, charisma and credibility like him to give the zone its pride of place in the Senate come next year.

He therefore urged the supporters to go all out to convince the party delegates on the need to nominate him as the party's flag bearer assuring that he has all it would take to win candidates of other political parties in the election proper.

He also used the occasion to commend the state and national leadership of the PDP for successfully conducting the last special ward congress and implored them to ensure that the coming party primaries are transparent and hitch-free.