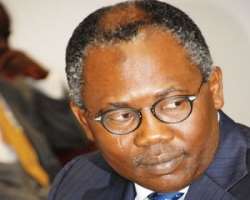 The duo of Attorney General of the Federation, Mr. Mohammed Adoke, and the Inspector General of Police, Mr. Suleiman Abba, insisted on Friday that  the Speaker of the House of Representatives, Mr. Aminu Tambuwal, is no longer entitled to security details because of his defection to the All Progressive Congress.


Their argument was that Tambuwal had ceased to be a member of the House and its Speaker, for having defected from the Peoples Democratic Party, which in 2011 sponsored his election into the House of Representatives, to the All Progressives Congress.


According to them, Tambuwal had now become an ordinary citizen, who was no longer entitled to the privileges attached to the office of the Speaker of the House of Representatives.

These were contained in a joint counter-affidavit, which they filed before Justice Ahmed Mohammed of the Federal High Court, Abuja, in response to the suit by Tambuwal and the APC, the IGP and the AGF are the 5th  and 7th defendants in the suit respectively.


The plaintiffs filed the suit to challenge the withdrawal of his security details, alleged threat by the PDP to declare his seat vacant and remove him as Speaker.

The lawyer, who represented the IGP and the AGF, Ade Okeaya-Inneh (SAN), argued that the police authorities could not be accused of breaching the Constitution by withdrawing Tambuwal's security details, since he (Tambuwal) had lost his seat as House member and Speaker.

The counter affidavit, which was deposed to on behalf of the AGF and IGP by one of their lawyers, Nnamdi Ekwem, read in part, 'The 1st plaintiff (Tambuwal) vacated his seat in the House of Representatives as a member of that House, when he became a member of the 2nd plaintiff (All Progressive Congress) in October 2014, having been elected in 2011mon the platform of the 1st defendant (PDP).

'The 1st plaintiff is no longer a member of the House of Representatives and as such not entitled to any right or privilege attached to the office of the Speaker of the 3rd defendant. That, the 1st plaintiff, as an ordinary citizen of Nigeria, was not exposed to any danger of bodily harm because of the withdrawal of his security details.'