Will Dayo Adeneye Win After Receiving Prayers With Hennessy Drink? 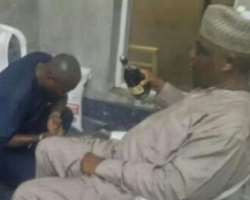 During the old days, parents and elders uses schnapps to bless their children that either just graduated from school or is about to face a new life or an apprentice that has just finished serving his master and is due for freedom as it is best described.

Nollywoodgists.com recalling the good old days of schnnapps, noticed that those days, schnapps were well respected that it was described as the elders drink. When doing these prayers, the elders will drink some quantity on the ground which is a sign of appealing to the gods, then shock some quantity in their mouth and spray it on the child and pronounce some prayers for the child to progress in life before the merriment begins with the addition of cola nuts and palm-wine.

Aside using it for prayers, the drink is also seen as the best gift that can be given to an elder that he will so much appreciate and expects more of it whenever someone is coming for visit and it is used for entertainment of guests. Although, there are some new brands of alcoholic drinks in the modern day society, yet the gin has not been totally abandoned as it still stands as one of the drinks demanded during some traditional marriages in Nigeria.

One of the most interesting or shocking aspect of the present day elders is when CEO of DAAR Communications PLC, High Chief Raymond Aleogho Anthony Dokpesi, used a modern day drink to pray for his media son, Dayo Adeneye, who is vying for a political office just the same way the media boss once did.

Though it is a sign of respect to the elder states man who has contributed immensely to the growth of the Nigerian media industry, but understanding the traditions of drink usage, was it right to have used 'Hennessy' to pray for D1 as he is popularly called? Would the drink used make an impact in D1's political stardom or would have the original schnapps made more difference since it is a traditional drink?