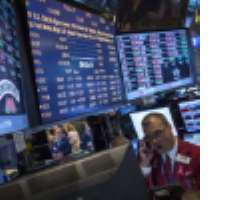 U.S. stock index futures jumped on Friday following a batch of solid earnings reports and on hopes the Federal Reserve might slow the wind-down of its stimulus in light of recent weakness in global demand.

The S&P 500 .SPX and Nasdaq .IXIC eked out slight gains on Thursday after another choppy session as economic data eased fears about the potential effect of a weakening global economy on the United States and following remarks by St. Louis Federal Reserve Bank President James Bullard that the U.S. central bank may want to keep up its bond buying stimulus for now.

The central bank had been widely expected to end its massive monthly bond-buying program this month.

Federal Reserve Chair Janet Yellen is due to speak at 8:30 a.m (1230 GMT) at a conference on income inequality.

The benchmark S&P index is on track for its fourth straight weekly decline, its longest streak in over two years, and is down more than 7 percent from its record high as concerns about the health of the global economy and possible spread of the Ebola virus have prompted investor selling.

Investors were looking toward corporate earnings to offset concerns about a slowdown in the global economy. General Electric (GE.N) shares rose 3.6 percent to $25.13 and was the most actively traded stock on the New York Stock Exchange in premarket trading after the company reported third-quarter earnings that topped analyst expectations.

Morgan Stanley rose (MS.N) advanced 3.7 percent to $33.72 before the opening bell after posting an 87 percent rise in third-quarter earnings.

Honeywell (HON.N) shares gained 1.6 percent to $87.76 before the opening bell after the maker of aircraft cockpit parts and other electronic equipment reported its quarterly results.

Urban Outfitters (URBN.O) shares slumped 14.1 percent to $29.70 after the retailer said its negative third-quarter comparable sales pace has continued. Volume of nearly 180,00 share represented over 7 percent of its 10-day average.

The earnings of S&P 500 companies are expected to grow 6.9 percent in the third quarter, according to Thomson Reuters data through Thursday, on revenue growth of 4.1 percent.