Gov. Amaechi The Quintessential Hypocrite & His Insults On The Kalabaris 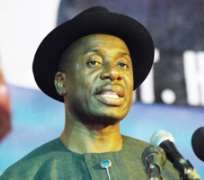 Let me start by saying that I know that this is an issue that many would rather speak on based on emotions than facts. I also know that many would prefer the usual propaganda to critically analyzing the real issues in contention in the topic at hand.

Some would wonder why I have decided to write on this dead issue. I understand that thought, yet, Governor Amaechi's continuous unguarded, tactless and rudderless propaganda on Soku and his recent insult on the intelligence of Kalabari se has forced me to scribble a little thought on his hypocrisy.

Why do I call Amaechi a hypocrite? I will tell you.

Media reports during the weekend quoted Governor Amaechi saying "...we have no faith in Mr. President returning our oil wells. They have taken the (Soku) oil wells; they are spending the money because they have the Presidency. The only way you can get back your oil wells is to vote out Mr. President. The only opportunity you have now is your vote. Vote him out, he is not Rivers, He is from Bayelsa. He has not and will not serve us...” (Petty right?)

Now, I will not talk of how petty and childish the Governor's whining is, that is something beyond my control. Yet, the insulting part of the statement is that Governor Amaechi who keeps telling all who care to listen what a faithful Christian he is, knows that the truth is that President Goodluck Jonathan whom he blames for all his woes, did not take any Oil Well from Rivers State and is thus, not in a position to return same.

It is only a hypocrite like Governor Amaechi that can blame President Jonathan for Supreme Court verdicts that are against him, while accepting the ones in his favour, including the one that brought him to power.

Just so we are clear about Gov. Amaechi's hypocrisy, it would interest you, my readers to know that on Friday, March 18th 2011(with Goodluck Jonathan still as President) the Supreme Court ordered the Government of AkwaIbom State to transfer 86 oil wells with revenues which accrued from the wells beginning from April, 2009 to Rivers State.

In a unanimous judgment delivered by seven justices of the highest court in the Land, led by the then Chief Justice of Nigeria, Justice Katsina-Alu held that AkwaIbom was bound by an agreement which it signed with the government of Rivers State and thus forfeits claim to the said wells to the latter.

Hear him: “It can be seen clearly from this letter that the parties have voluntarily jettisoned Technical and Historical Solutions. This is so because these Solutions were considered at the meeting before opting for the Political Solution. The parties faithfully implemented the terms of the agreement till the tail end of 2007 when AkwaIbom unilaterally sought to rescind the agreement and commended its agitation for the application of the Historical Solution.”

With the judgment, AkwaIbom was made liable to refund money running into billions of naira to the River State Government for Oil wells that actually belonged to her, save for a gentlemen agreement entered into by their former Governor to satisfy President Obasanjo.

Former governors Obong Victor Attah of AkwaIbom State and Peter Odili of Rivers State were the signatories to the agreement.

Attah's successor-in-office, Governor GodswillAkpabio had kicked against the political arrangement in 2007 and persuaded the Federal Government to return the 86 oil wells to AkwaIbom.

AkwaIbom unilaterally repudiated the agreement and started receiving the revenues accruing from these oil wells.

Odili's successor-in-office, Governor RotimiAmaechi cried foul and challenged the return of the oil wells to AkwaIbom first at the Federal High Court and later at the Supreme Court."

Governor Amaechi had since gotten and obeyed this judgement and even held a Thanksgiving service to celebrate where he declared that God has shamed his enemies. He never blamed President Jonathan for giving him 86 Oil Wells belonging to Akwa-Ibom State. Yet, he blames the president daily for Soku in order to cause inter clan wars within the Ijaws of Bayelsa State and their brothers in Rivers State.

Let Amaechi tell, no, show the Kalabari People the Trans-Kalabari road that he has constructed with the Billions of Naira the State get from Kalabari land or other things he has done there.

It is not enough for Amaechi to shift all his responsibilities to President Jonathan.

If Amaechi who is the Governor of Rivers State knows that the State he leads is being cheated, why has he not gone to court again on this, just as he did before, rather than whine around daily? If Jonathan has illegally taken Oil Wells from Rivers State, why has Amaechi who is known to be a regular visitor to the courts, not sued the President in a competent Court of Law, rather than continue to cry in Churches and Rallies?

Amaechi's hypocrisy is insulting to the Kalabaris and the entire Rivers People. He was voted to lead, not to whine.