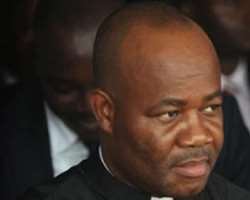 The Governor of Akwa Ibom State, Godswill Akpabio, has said that endorsement of consensus candidates for elections not only deepens democracy but makes primaries rancor free.


Akpabio while fielding questions from State House correspondents after meeting with â€Ž President Jonathan at the Presidential Villa, said while the endorsement of candidates is new in Nigeria, it is a common best practice in the other parts of the world including the United States, where Nigeria derives it’s democratic practice from.

â€Ž
â€Žâ€Ž”Is not only that endorsement makes 2015 elections easier for the PDP, it also makes the political calculation in Nigeria totally free and devoid of violence and unnecessary acrimony and it brings harmony within the politics of the entire nation. Note that it deepens democracy.


“I was asked this question by a member of the Congressional Black Curcouse in United States two weeks ago, he said why the endorsement and we explained. I said here is a President inspite of all distractions he has remained focused in trying to transformed the Nigerian economy and today even under the present circumstances, Nigeria is running the biggest economy in Africa. I didn’t say so, it is World Bank and the international agencies that said so. And we have been rated the 24th economy in the world.

“What we need to do now is to translate that into job creation for our children and to bring more industries to Nigeria and to attract more investments. But of course we cannot rest on our oars we must work harder to improve the power sector and the impetus in the agricultural sector.


“So that endorsement for me deepens democracy in every sense of the word and also signals to the world that Nigeria has arrive in terms of democratisation. Don’t forget that the PDP is modelled after the democratic party of America that has almost similar practice. When they see a performing President in America they don’t allow him to go for unnecessary primaries and that was what happened with Obama.


“Obama didn’t go through any primaries in the Democratic Party. And so the governors of Nigeria took a look at the best practices of democracies worldwide and that endorsement came and was rectified by the Board of Trustees and the National Executive Committee of our great party. Is the first time such is happening since 1960 and we congratulate all Nigerians and all stakeholders that took part in that endorsement. And I can assure you that it will allow the President to focuse on the main elections and the business of governing the country,” he said.


The Akwa Ibom governor argued that such endorsement was however, not feasible in states including Akwa Ibom because of the large number of gubernatorial hopefuls, hence the decision by stakeholders to leave the field open for a free and fair primary election to select a PDP governorship candidate in the state.


“It is very difficult because of the large number of aspirants. If you have a large number of aspirants it is good to allow all of them to go to the field and test their popularity. I did that, I am a product of good primaries. We were 57 in number in 2006; we were the highest in the country. I contested against 57 people; in total we were about 58.


“So, I defeated 57 people to become the governor of Akwa Ibom state. so, at the state level once you have a lot of people showing interest in the governorship it is good to allow a level playing field and give opportunity to all. It also helps democracy because it helps people to go out, propagate the ideas of the party and talk about what they would like to do for the electorate, sell themselves and the manifestos and from there the electorate would have the opportunity to pick the best out of the lot.


“At the state level I would want to urge all my colleagues, the governors and stakeholders of the PDP to allow a level playing field so that all candidates can go out there. There is a lot of joy when people are canvassing and going round. It keeps even the voters excited, you know and also helps to spread some largesse around because in the course of consultation something is dropping from  party faithful here and there and then people are drinking, I mean, this thing should be joy,” he stated.