Enugu 2015: Why we chose Ugwuanyi as consensus candidate, by Nwodo 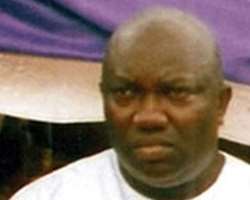 Former National Chairman of Peoples Democratic Party (PDP), Dr. Okwesilieze Nwodo Sunday gave more details on why party stakeholders and leaders from Nsukka senatorial zone of the state prevailed on most of the governorship aspirants to step down for a three-term member of the House of Representatives, Hon. Ifeanyi Ugwuanyi to the become the zone's consensus candidate for the 2015 election.. Nwodo who was part of the caucus meeting where Ugwuanyi emerged as the preferred candidate said their decision was driven by the determination of the zone to produce the next governor of the state.. The PDP in Enugu state had last year formally zoned the governorship ticket to Nsukka zone in the spirit of fairness, equity and justice since the Enugu East and Enugu West had produced governors between 1999 to 2015. while Chimaraoke Nnamani hails from Nkanu in Enugu East, Sullivan Chime hails from Udi in Enugu West.. Ugwuanyi emerged during the PDP Enugu North Senatorial District Caucus meeting called by Governor Chime to meet with the governorship aspirants from the zone, where the governorship position was zoned, a meeting convened 'in order to reduce rancor and bitterness amongst interested parties and ensure smooth transition for the Party'.. Among the aspirants that were present during the meeting include the Senate committee chairman for works, Senator Ayogu Eze, speaker of the state House of Assembly, Hon. Eugene Odo, state chairman of the party, Engr. Vita Abba, Hon. Former deputy governor of the state, Chief Okechukwu Itanyi, Hon. Pat Asadu, Prince Mathew Agu, Amb. Fidel Ayogu, Prof. Osita Ogbu, Chief Ikeje Asogwa, Prof. Simon Ortuanya and Mr. Dan Onyishi. Thisday .