2015: WHY JONATHAN DESERVES A SECOND TENURE-GVM 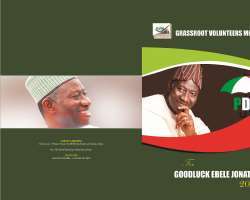 2015: WHY JONATHAN DESERVES A SECOND TENURE-GVM
A socio-Political Pressure Group, Grassroots Volunteers Movement-GVM has joined millions of Nigerians in clamoring for the return of Goodluck Jonathan as the country's President, come 2015.

Chairman, Board of Trustees of the group, Prince Sunny Ekanem made the call during a Peoples' Democratic Party South-South rally in Benin, the Edo state capital.

According to him, President Jonathan has performed creditably well in all ramifications and deserves another chance to complete his good works.

“President Jonathan is a pragmatic and visionary leader. He is well-footed, has a listening ear, ready to implement his visionary programmes and has performed creditably well to deserve a second tenure”

“The greatest work of God to man is service to humanity. Jonathan's humanitarian services, particularly, his Almajiri model schools Project in Northern Nigeria stands him out of the crowd. It is the first of its kind in the history of Nigeria.”

He advised opposition to be objective in their assessment of the present administration in order not to misrepresent facts and mislead the populace.

Speaking on the President's achievements, Ekanem argued that his revolution in the Power, Agricultural and educational sectors has never been experienced in the country's history.

In the area of good governance, the GVM boss described the President as a true democrat who has upheld core democratic values and brought democratic dividends to the doorsteps of the citizens.

He lamented over what he described as “lazy opposition, sabotage and deliberate distortion of facts by those opposed to the President's return,” even as he urged them to put the country's interest first.

It would be recalled that members of the Grassroots Volunteers Movement-GVM turned out in their numbers to participate in the South-South Unity Rally of the Peoples Democratic Party, in solidarity with their choice for Nigeria's seat of Power in to 2015-Goodluck Ebele Jonathan.