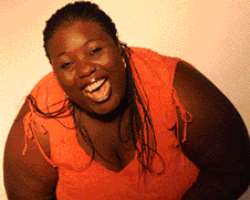 'It's a blessing being big'

Big, bold and beautiful, all hail queen of comedy, Lepacious B.Bose Olufunke Ogunboye. She has won accolades and described as a true, original and brilliant comedy mind.

“I'm a lawyer, called to the Bar in 2001. I also have a degree in Theatre Arts both from the University of Ibadan. I'm in comedy not because I think am funny but because I have to make a living. I've been a professional comedian since 2006. While in school, I was a stand-up comedian and hosted the campus show LAUGHAMANIA.”
Growing up years

“I was a mischievous child, very troublesome in school. I also grew up always reading because my parents were academics. You had to read a newspaper everyday and tell my dad what you read about. It helped shape me. Though I must say I never used to enjoy it then because I was forced to read. As I got older I came to enjoy it. I had a wonderful cantankerous childhood, growing up wanting to be the best in anything I did. My parents always pushed me harder then most kids I guess. No disco, no parties. No going out, no time for playing around. As an only girl they did not want to take any risk with me.”

Philosophy
“I guide my life by my opinions. Nobody can dictate my happiness. Guard your heart with all diligence for out of it come issues of life. No star can shine with a broken heart. Never allow anybody hurt you and destroy what you stand for.”

Entertainment as choice
“I was born to do this, it is innate. Right from when I was young, I had always been in the youths choir, school play, drama society, I was never found missing. Whatever makes me stand in front of people has always given me joy. Times when I sit and think, what do I want to do after comedy? It comes right back, every other preferred choice still has something to do with entertainment.”

Role model
“My best role model is Prophetess Juanita Brynum, a female pastor making waves in a male-dominated field. She has gone through all sorts of experiences yet she is still standing. She has proven she is a strong woman. I also consider Monique a role model because we are branding the same thing, plus-size beautiful women at the top of their games. She shows that you can do it if you want. Though I could take offence if I am being hinted as patterning after Monique. Moreover as at the time I got into the comedy industry, I did not know her as a stand-up comedian. So without a Monique, I would still be in this job.”

Discrimination
“In everything you do, there are discriminations. Female comedians are always discriminated against. Tell me why would you want to launch a food product, sanitary towel, beauty product and use a male MC? Why would a male compere be paid N500,000 and then intend to pay his female counterpart N150,000? I mean the distance is just too far. Why are we being so devalued? Are you choosing a man over a female just because he is better or just because he is male? I have a problem with that. It's grossly unfair. This, you will never find in the music industry.”

Funnier, male or female?
“Comedy is not like music that you could do a playback, mouth off, get off the stage and collect your money. Being funny is not a gender thing. Being funny has to do with delivery. Some people no matter how hard they try don't just have the funny bones. Some people you just look at and you start laughing. Some will jump all over the stage and you wonder, what the heck is wrong with this guy? There are some antics or language our male counterparts can perform on stage. If we {female} try it, it may look vulgar and could be labelled a prostitute. Although everybody has his own opinion of what funny is or not.”

Gender challenges
“As at the time I got into the comedy industry, we were just two. So it took a while to break in. I remember in the earlier days, my wonderful friend and brother Owen Gee while soliciting for a job for me, would actually make monetary bets with the organisers who were hesitant to use a female comedian, to pay or not depending on the outcome of my delivery. You can imagine how hard it was, it was highly challenging. It is the same scenario in America, for the female comedienne. Secondly, we are in an African society where a woman cannot insult a man.

A woman dares not make a man the brunt of her joke. You will have to contend with both the guy's anger and probably that of his partner, but then a guy shall merrily get away with it. A male comedian rocks the whole nightclubs making valuable contacts and doing proper networking for him, a female tries it and she is termed a cheap night crawler. For a female, nobody will excuse you. A guy can also wear the same suit in a row for three consecutive times. A female celebrity repeats the same dress in the space of six months and she is sneered at as lacking style. So you see, it's a man's world.”

Body image
“Amazingly no, the culture of body image does not affect me. I mean there are things I can get away with that a slim person could not. I only hate it when you judge me first by my image. I walk into a shop and you announce to me that you don't have my size, What if I come to check out accessories? I go for a job interview and you conclude that I can't have it because you think I might be lazy. I have issues with such things. Although I do not blame people who treat plus-size women shabbily. Most of us don't carry ourselves well or adorn styles that suit our body size. However, it is a blessing for me to be this big with no stretch marks. That is why Monique, Queen Latifah are my style icons, they've got the style.”

Experience
“It has been a blessing and a great privilege, it has been erratic. As an entertainer, everyday is a party whether you are in the mood or not. You have a job to make people laugh. At times, I just want to have a quiet time all by myself. It's also a blessing to have an opinion and actually get away with it. Nigeria has come a long way unlike in the days of the military when there was no freedom of speech. It is also a blessing to put aside your feelings and make people happy.”

Dream wedding
“That's interesting. You know when you are younger, you dream of a Cinderella wedding or perhaps the late Princess Diana long wedding train. But sadly you notice after two years, everything falls apart. The couples split and you wonder, what happened after such a magnificent wedding? Fast forward 29 years, things get complicated, you are cautious, you just want a basic wedding. Then you hit 35, you finally get it. You just want to have a simple civic ceremony, just you and your man. All the flamboyancy does not make a good marriage. The most important thing is finding your soul mate. A good man from a good home, not necessarily wealthy. All you need is that he be good to you.”

Success
“Success for me is being able to acquire the bare necessities of life. My definition of success is not being popular. It is the capability to get what I want when I want it. I'm a celebrity who is just trying to make a living. So, being popular is just the downside that comes with it.”

Extra curricular
“I'm sorry to say, but I really don't like my day job. But my dear parents will see my Law degree as a joke if I don't work. Like I mentioned earlier I come from an intellectual family, so you have to be seen as busy with a job not a dormant brain. To be seen as actually using your certificate. I'm expected to do serious work and for the time being am still the baby of the family so they still make decisions for me.

Feminism
“What exactly is being feminist? I do not believe a woman should pay the bills likewise I do not believe a woman is the head. I do not believe women should be in competition with men. If it affects your home, family and relationship, then I think you should drop that attitude or ambition. A woman who believes that what a man can do a woman can do, yes I agree with that. I just want women to be given the same opportunities as men. So am sorry am no feminist.”

Poaching
“Yes, it happens in Nigeria everyday, comedians stealing their fellow counterparts' jokes. It has happened to me oftentimes. More annoying also is when using my jokes while am there and also using me as a material for it! There is no watchdog in the comedy industry unlike in music business. Everyone knows Bracket sang Yori-Yori, so another musician cannot steal or perform it. Really you cannot monitor jokes. I am personally appealing that all we need is to look more and be a little more creative. There's an array of everyday happenings to use as materials for jokes. Most of my jokes are about me, am using myself as a material. I tell you, it will soon come to a time when someone will actually confront a colleague on stage while performing. People now see us as not being creative enough. Imagine working so hard to create a joke and someone steals it, it's frustrating.”

Self-deprecatory jokes
“This is the easiest thing for me to talk about. I can talk about it in a way that will amuse people unlike a slim person, it may take a wrong note. I don't think is fair to use a member of the audience as a brunt of your joke. Though as much as I make fun of myself, I do not find it funny when my fellow comedians do it. There is a thin line between a joke and being insulted. Those who have done so are neither my friends nor acquaintances. I have laughed, cried, despised and celebrated this body. So, this body is my first hand experience I know it very well. My weight has always been an issue. I even have people come up to me and tell me to stop making a joke of myself. Citing that it seems I suffer a low esteem, far from it. The highest form of high esteem is the capacity to laugh at yourself. It means you are confident and ok with it.”