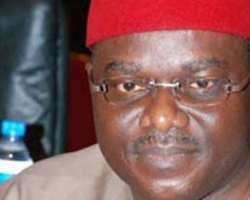 The Federal Government has said it was not planning to close any of its borders on account of the deadly Ebola Virus though it has not ruled out the possibility should the need arise.

Responding to THISDAY enquiries, the Minister of Health, Professor Onyebuchi Chukwu, explained that the regulations of the World Health Organisation (WHO) do not support the closure of borders in situations like this.

Yet, he conceded that the Federal Government could consider closing the country's borders in the event of an outbreak.

“We may consider shutting our borders if it becomes serious, but for now we are not doing that. WHO does not support that,” he said.

Lagos State Governor Babatunde Fashola had on Friday decried allowing free entry of people at the nation's various border posts, saying that the spread of the disease would be more easily contained if localised.

“This is no longer a local problem; it is an international problem because it is being transmitted across the borders…From what I gather, unless the spread of the disease is localised it becomes increasingly more difficult to stop its epidemic. We must make that choice now and consider it very seriously. It is a national security issue and I think we should give it the required attention,” Fashola had said.

On the Liberian, Patrick Sawyer, who was identified as the first Ebola victim and was known to have arrived in Nigeria with the disease, the minister disclosed that the National Centre for Disease Control had cremated his body in consonance with laid-down practices.

“Under the WHO protocol, it is not wise to be transporting the corpse of anyone who dies as a result of this disease,” Chukwu explained, adding, “That was why the body was cremated. The family of the late Liberian, through the government of Liberia, requested for his ashes, and that is where we are.”

According to the minister, 69 of the people who had direct contact with the deceased Liberian had been placed under surveillance while two had been quarantined.  “They will remain under surveillance until after three weeks, which is the incubation period for Ebola. If they are fine after that time, we can then proceed to the next stage.

“Investigations are still going on. We are working with the Cross River State Government to identify secondary contacts, too. It is good we have their details, and keep in touch with them in case there is an incident.”

The minister reassured Nigerians that there has been no other reported case of the dreaded disease in Nigeria, adding “As of today, WHO has commended Nigeria for its efforts in stopping the spread of the disease.”

In addition, a team of health experts have been dispatched to Anambra State to dispose of the corpse of an Anambra indigene reported to have died of the disease in Liberia, according to the WHO regulations.

“Before disposing of the corpse, tissue samples will be obtained for laboratory analysis,” the minister said. “The Governor of Anambra State is to be commended for reporting the matter to the Federal Ministry of Health officials.”

But speaking to THISDAY, Director of Public Health, Federal Ministry of Health, Dr Bridget Okoeguela, said ministry officials had been mandated to keep vigilance on the said hospital in Anambra State where the corpse of the Nigerian, who was flown into the country is being kept.

According to her, “we were monitoring the movement of the corpse in Lagos but before airport officials could prepare for further examination of the body, the family members took the body to Anambra State.”

“We are working round the clock to ensure that the virus does not spread.  We have also positioned our health workers in Anambra to keep in touch with happenings around the hospital. At the moment, the hospital will remain sealed until our investigation is complete on whether the man died of Ebola or not.”