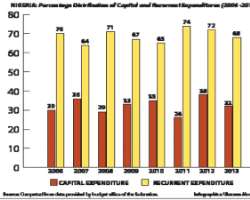 The Consumer Price Index (CPI), which measures inflation, rose to eight per cent in May 2014 compared with the 7.9 per cent recorded in April 2014.

According to the data released by the National Bureau of Statistics (NBS) yesterday, the price increases seen in May were as a result of higher prices in groups that contribute to both the Food and Core sub-indices. Specifically, Food prices edged higher to 9.7 percent, up from 9.4 percent in April. Prices were pushed higher as a result of higher prices in the Bread and Cereals, Fish, Dairy, Fruits, and Vegetable groups.

The price increases in the food sub-index were however weighed down by relatively slower increases in the Meats, Oils and fats, and, Potatoes, and Yams and Other tubers classes. Prices measured by the 'All items less farm produce' or Core sub-index increased at a faster rate in May from April.

Since a decline of the headline index in January, prices continue to trend upwards, albeit at a slow pace increasing by 0.1 percentage points (year-on-year) each month between February and May.

Prices rose by 7.7 percent (year-on-year), which was 0.2 percentage points higher from the rate recorded in April. This is the highest year-on-year rate recorded for the Core sub-index this year. Groups that contributed to the increase in the Core sub-index include furniture and furnishings, garments, rental prices, as well as liquid and solid fuels. It should be noted that the Headline Index is made up of the Core Index and Farm Produce items.

As Processed Foods are included in both the Core and Food sub-indices, this implies that these sub-indices are not mutually-exclusive.

On a month on month basis, price increases in the headline index have risen and fallen since the start of the year. Prices increased by 0.78 percent in May, higher than rates recorded in April by roughly 0.2 percentage points. The month-on change also matches the highest month-on-month increase recorded this year (in March). Urban prices increased at a faster rate in May, 8.2 per cent, up 0.3 percentage points from April, after growing at a constant rate in March and April (7.9 per cent year-on-year).

Rural prices increased by 7.8 per cent in May, also up by 0.3 percentage points from April, and the fastest since January 2014. On a month on month basis, movements in the Urban and Rural indices have largely mirrored the headline index this year.

In May, the Urban and Rural All-items indices rose by 0.8 per cent and 0.77 per cent respectively, which is about 0.2 percentage points higher than rates recorded in April. The percentage change in the average composite CPI for the twelve-month period ending in May 2014 over the average of the CPI for the previous twelve-month period was recorded at 8.0 per cent, marginally lower from the 8.1 per cent average twelve month rate of change recorded in April 2014. The corresponding 12-month year-on-year average percentage change for the Urban index was 8.2 per cent, while the corresponding Rural index was recorded at 7.9 per cent.