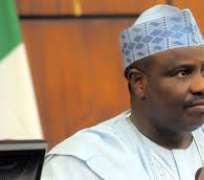 Speaker of House of Representatives, Aminu Tambuwal, on Saturday called on Boko Haram members to sheath the sword and embrace peace for the stability and development of the country.

Tambuwal made the call during a conference organised by Jama'atul Naasril Islam (JNI) in Kaduna, Kaduna State themed: “Practical Steps in Uniting The Nigerian Muslim Ummah and the JNI Annual Pre-Ramadan Meeting.”

“As a political leader, it is incumbent on me to preach peace and unity that should give way for progress of the country.”

He said all well meaning people and community leaders across the country must take steps to intervene in the current security challenge confronting the country.

“We must preach peace and unity to unite our country and our immediate society,” he said.

Tambuwal said dialogue was the utmost solution to curtail insurgency in Nigeria, adding that, confrontation would prolong terrorism in the country.

“We need to dialogue and ensure that those recalcitrant citizens are brought back to normal social fold.

“But the state would not fold its arms and watch while other innocent citizens are being killed.

“The state will continue to use its military might to defend the territorial integrity of the country until victory is achieved,” he said.

The Sultan of Sokoto, Alhaji Abubakar Sa'ad, said peace was the bed rock of development, adding that, “you cannot see development without peace.”

He called on Muslims to continually offer prayers for the peace, progress and stability of the country.