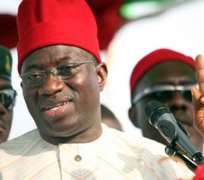 That President Goodluck Jonathan is yet to visit Chibok two months after the abduction of 276 girls from the Government Day Secondary School in that town, in Borno State, reflects the moral burden his administration is now saddled with. This apathy was fittingly demonstrated by the President himself, the other day, when, in an embarrassing turn-around, he cancelled a widely publicised planned trip to the town, where he was supposed to sympathise with the parents and families of the abducted girls. Had he made the trip, he would have, in concrete terms, given the best gesture of re-assurance to Nigerians and the rest of the world that he is in charge of all of Nigeria and cares about all of her people.

Despite reports from the Presidency to the contrary, there were indications that the President had plans to visit Chibok, and thereafter, fly to Paris, France to attend a security meeting on Boko Haram, hosted by the French President. A presidential advance team was said to have been sighted in Maiduguri, even as heavily armed soldiers and policemen were reported to have unusually manned the airport road leading to the Nigerian Air Force Base and the Government House, thereby lending credence to the claim that the parents of the abducted girls and people of Chibok were preparing to receive the President.

So, the questions are: why did the President cancel the trip? And why has he not been to Chibok till now? Was it as a result of a leakage of the information about his intended trip, and who could have leaked the information that the President was going to Chibok? Why was there even an advance party for an exercise that ought to be as discreet as possible? In other climes, as U.S. President Barack Obama's recent visit to Afghanistan demonstrated, such sensitive missions of profound security concern require tact, clinical efficiency and maximum concealment from public knowledge until accomplished.

However, this sharply contrasts with the unwarranted noise associated with President Jonathan's planned visit, about which one helmsman of an information agency spills the beans and another denies; a minister attempts a clarification and another aide in the Presidency re-interprets wrongly. There is a barrage of information coming from the same source but clashing as counter-currents, with the end-result of misinforming and disinforming the public.

Besides the apparent absence of consensus about the Chibok event, the slapdash handling of information suggests a struggle for primacy among the various helmsmen in the information machinery of the administration. The existence of four competing sectors of the same function jeopardises the public relations potential of the Jonathan administration.

At such crucial moments of national history as this, collective anguish demands synergy to avert the dissipation of time and resources towards conflicting results.

But the irony of it all is that this is one administration that simply refuses to learn, even from its own missteps. This same manner of management of information has repeatedly resurfaced so often that Nigerians are left to wonder how the highest quarters of the military and the Jonathan administration can be so imprudent?

More importantly, however, the hubris oozing out of the President's spin-doctors, notwithstanding, the buck stops on the President's desk.  His servants, which advisers and aides, however high up, are, cannot act as substitute for the passion, will and intellect of the President. The President's act of being and the autonomy of decision to carry on as such, rest on the person of the President himself. He is the only one who can hold the gavel to stem the current of pestilential perfidy.

Certainly, there is everything wrong with that botched trip and failure to be in Chibok till now. First, it portrays a reluctant President, who with his team, is either unable or unwilling to respond timeously to the mood of the nation. Second, that the President would, after deciding on the trip, call it off abruptly for whatever reason, is an obvious display of impudence. Besides, it also portrays the President as one who vacillates in the treacherous ping-pong of the denizens at the corridors of power.

Why is it that whenever history furnishes our President the opportunity to roar, he whimpers? Why does President Jonathan tiptoe when an unmistakable stomping around would do?

To redeem himself and garner some credibility for his administration in this trying time, he must find his way to Chibok, however he plans to do it. President Jonathan does not need a retinue of bomb squad to accompany him and he does not need an advance party or bureaux of the Presidency to herald his coming. He should go incognito.

As the Commander-in-Chief, President Jonathan owes the hurting people of Chibok a moral duty to see them. Above all, he should go to the theatre of war, to send the strongest signal yet to all Nigerians that he not only cares as their President, he is taking full command of the war on terror.