Bayero pillar of support to me, says Obasanjo 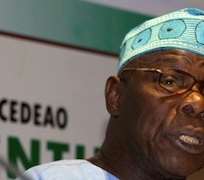 A former President Olusegun Obasanjo on Saturday said the late Emir of Kano, Alhaji Ado Bayero, was a pillar of support to him when he was in power.

Obasanjo said at a condolence visit to the palace of the late emir in Kano that the deceased was a legend and icon who would be missed by all Nigerians.

'He had been a pillar of support, a confidante, an adviser and a friend.

'As a just ruler, his reign spans over half a century. He was very active in building this country politically, socially and economically,'' Obasanjo said.

He advised the successor to the throne to emulate the virtues of the late Bayero, who the former president, said had left a big vacuum in the heart of his admirers.

Meanwhile, various traditional rulers, politicians and businessmen continue to troop to the palace to pay their condolence.

Also, women from various works of lives were also not left out as they went into the chambers of the late emir's wives to console them. (NAN)