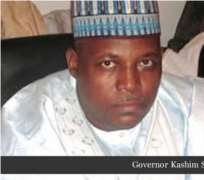 BEVERLY HILLS, CA, June 06, (THEWILL) - The war of words between the leader of Ijaw nation, Chief Edwin Clark, and governors of the three North-eastern states currently under Emergency Rule, continued on Friday.

Governor Kashim Shettima of Borno State slammed the Ijaw leader once again, asking him to always look and see 'beyond his walking stick' and behave in line with his age instead of making statement that has the potentials of destabilising the nation.

Speaking during the visit of Niger Delta people residents in Borno State who came to the Government House Maiduguri to dissociate themselves from utterances credited to Edwin Clark, Shettima described Clark as someone who does not act in accordance with his advanced age .

Shettima, who declared that he is foremost a Nigerian before being a Borno man, said this informed his decision in 2012, to appoint a Niger Deltan from Delta State as his Special Assistant working directly with him and also his appointment of an Ibo man as Special Adviser as well as his spokesman from Zamfara State and another assistant from Gombe.

'We are one people, the majority amongst us in terms of numerical strength, whether in tribe or religion, must give sense of belonging to the minority. It is people like Elder Edwin Clark that do not really understand who we are and who we should be in this country.

'Power does not last forever. Every opportunity you have is one that you must miss someday, however long. He is 87, he should be a father to all, and he should champion the course of nation building and not sectional interest, if for nothing else, at least for his age.

'From the moral point of view, God gives some consideration to the youngest and the eldest. Let us continue to urge him in a polite manner, to see Nigeria beyond his walking stick. The hat that he puts on should provide shield not only to his grey hairs but to the young hairs of other Nigerians regardless of where they come from. Age should always go with wisdom of tolerance, wisdom of truth and defense of it, wisdom of togetherness and national unity, ' the governor said. Shettima told the Niger Deltans that he regards them as Borno people contrary to what they named their group.

'I will prefer to call you Forum of Borno People from the Niger Delta. Some of you were born here in Borno State; some of you probably had parents or grandparents born in Borno. Most of you have something doing in whatever respect whether as business men, traders or whatever it is you are doing and by that, you are contributing to the economy of Borno State.

'The allocations given to Borno from the Federation Account is given based on our population amongst other indices being considered and all of you here, regardless of where you consider your roots, make up the population of Borno State and this means, you are stakeholders in what we get from the Federation Account, you are fully entitled to all public services and privileges what we provide as a Government.

'When Boko Haram members in their evil ways, planted explosives around the post office in January, this year, the explosives did not choose victims based on their backgrounds and what part of the country they came from, the explosives simply targeted residents of Maiduguri who happened to be on the spot. This is the same of other wicked attacks in any part of Borno State. So, to me and indeed to every reasonable person here, you are part and parcel of Borno State, you are sons and daughters of this State with roots from the Niger Delta,' Shettima stated.

The group, under the auspices of Niger Delta Peoples Forum in Borno, had earlier told the governor that Chief Edwin Clark utterances on the need to impose military rule in the Northeast was uninformed.

In a statement read at the meeting by the Secretary General of the Forum , Prince Stephen Ebri , the group said they represent hundreds of their kinsmen who have seen, hear and know the real happenings in the state and felt ashamed when those they described as their ignorant elders speak from a far and end to mislead Nigerians.

'â€ŽThere is one issue that is seriously troubling the minds of every one of us here and that is how some of our elders from the Niger Delta that are completely ignorant of the true situation in Borno State are attacking this Government that is doing everything within its powers to address the problem.

'Sir, we were in Maiduguri when you were sworn in on May 29, 2011. Sir, in case our elders in the Niger Delta do not know, there are Niger Delta people living in Borno, we are from the Niger Delta but our difference is that we are well informed about the true situation and they are ignorant, they don't know, they don't want to know and we don't think they will ever know. We are not fools or sycophants, we are responsible people that will call a spade a spade.

'When you were sworn-in, Maiduguri was in disarray, people were being killed daily, bombs were everywhere, all of us were living in perpetual fear, young boys were threatening everyone with guns, calling phone numbers to threaten people.

'But today, Your Excellency, you have been able to lead the people of Maiduguri to rise against threats and defend themselves. Today, Maiduguri is an opposite of what it was when you came in. Rather than the fear and citizens imprisonment you met in May 29 2011, today, there is peace, security and freedom in Maiduguri,' Ebri said.