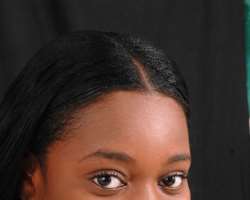 Since her days on the award-winning TV series Things We Do For Love to date, Jackie Appiah has worked judiciously and tirelessly to carve an image of a good actress, a role model and a source of inspiration and entertainment to well-loving Ghanaians and many others outside Ghana.

Her professional work ethics have seen her star in a plethora of best-selling movies that have garnered several awards and enabled her annex several accolades, including the prestigious African Movie Academy Awards (AMAA) for Best Supporting Actress in 2007.
In the wake of all the recent negative publicity, Jackie Appiah remains unfazed and has just completed the shooting of the movie Who Loves Me from the stables of Venus Film Production.

Jackie has forged a perfect working relationship with many producers but ever since she starred in her first feature film, Divine Love, with Abdul Salam Mumuni, the two hard working personalities have worked together in a deluge of movies, including Mummy's Daughter, Beyonce, Tears of Womanhood, Her Excellency, The Prince's Bride, The King Is Mine and The Heart of Men.

Jackie Appiah cements her loyalty with Venus Film Production with the new production Who Loves Me, a movie that will showcase Jackie's acting prowess one more time and put her adept acting abilities beyond doubt.

In Who Loves Me, Jackie puts up a sterling performance, synonymous to the performance she put up in the critically-acclaimed Beyonce, a performance that won her the Best Supporting Actress at the AMAA.

On how she continues to be on top of her acting career and other related endorsement campaigns, Jackie said that her commitment and dedication to the job and the special grace of God have seen her through all this time.

"It has not been easy but I remain highly committed to the work and try as much as possible to put out my best so the fans can appreciate whatever I do," she stated.

Like many high-profile celebrities, Jackie Appiah has faced lots of good publicity and a few bad press but she has always remained tactful and resolute in dealing with such negativity.

"In this field of work, there are positive and negative reportage and so, one needs to be strong-willed and circumspect in how he/she deals with the media, and though it has been torrid, I have been able to handle it," she retorted.

As an actress, wife, mother and a brand name for corporate firms, Jackie deserves accolades for her ability to combine her laborious acting and endorsement duties with family issues.

"My family gives me all the encouragement I need in all my endeavours and they've been very understanding and supportive throughout the years," she emphasized.

Commenting on the fast-spreading rumour about her supposed failed marriage, Jackie laughed it off and stated emphatically that she's still happily married to her very loving husband, who is very understanding and stands by her in all circumstances of life. "My family is always there when I need them; my husband and son usually visit me on set whenever the opportunity arises - which means we are very close and coping very well, by the special grace of God,' she said, flashing her characteristic genial smile.

Over the years, Jackie has had a good relationship with the media, always taking time out of her busy schedule to grant TV, radio and newspaper interviews and credits them somehow for her impressive rise in the movie industry. She has established a good rapport with all media personnel and opens her doors to them whenever they need information and clarification on issues concerning her life, family and career.

"The media is doing well with the propagation of the Ghanaian movie industry and I have always maintained a cordial relationship with the media and almost everybody in the media has my contact addresses and so, I am astounded and highly disappointed that sometimes, some media persons would put out obnoxious and defamatory stories without doing thorough investigations - seeking my side of the story or clarifications if they were any or check with me if there is any shred of truth in whatever stories they are putting out,' she muttered.

To her adorable fans, Jackie said, she is highly appreciative of all the goodwill messages they have been sending. She has worked hard to build a good image and she's aware of her status as a role model and an inspiration to many upcoming actresses and so, she will not engage in any deed that will tarnish her reputation and bring the Ghanaian movie industry into disrepute.

Mrs. Jackie Appiah Agyemang has also noticed with concern that although she's signed on the social network, facebook, several persons are posing to be Jackie Appiah and making comments attributed to her. Jackie would like tell her fans that she's not responsible for the comments coming from all the so-called Jackie Appiahs on facebook.

She shared her hilarious experience on the network. 'I tried signing on to the network but I realized there are like 5 different Jackie Appiahs on the site and when I attempted to say I am the real Jackie, some other person posing as Jackie asked as to what showed I was the real Jackie?'

"I am presently working on my personal website, which I believe will solve the issue of other persons usurping my personality on facebook and I will launch it when I am done," she added.

Who Loves Me, the new movie starring Jackie Appiah as lead actress is slated for a grand premiering at the Silverbird Cinema in early March 2010, and as always, Jackie will be around to have a memorable time with her cherished fans.