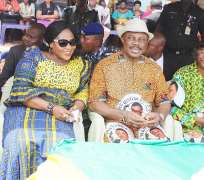 Anambra State governor, Chief Willie Obiano has given a six-month ultimatum for the completion of the 3.3 kilometre Ekwulobia - Ezinifite road project the state government awarded at the cost of N770 million.

Speaking while inspecting work on the road awarded by his predecessor, governor Obiano who expressed satisfaction with the progress of work done so far assured that all outstanding debts that might get in the way of a timely delivery of the project.

The governor said his administration would insist on high standards on all road projects to stand the test of time and justify the resources expended on them, further explaining that an artificial lake would be created for proper channelling of flood water to protect houses and farmlands.

He implored the benefitting communities to give the contractor the necessary cooperation to ensure that he completes the project on schedule and enjoined those who had gone to court to vent their grievances in relation to the road to withdraw their cases, noting that when completed, the road would boost socio-economic activities in the area.

He urged the youths in the area to participate actively in the on-going registration of unemployed persons to benefit from state government empowerment programme that his administration has put in place.

In his speech, the Commissioner for Work, Arc. Sir Callistus Ilozumba said the road was well designed and awarded to a competent contractor and disclosed that the contractor had been fully mobilized while the ministry would maintain strict supervision.

Speaking, a member representing Aguata II state constituency, Ikem Uzoezie expressed happiness with the ongoing work which he said would give the people an easy access to all parts of the state and further empower the farmers.

In his reaction, the chairman of Orumba South local government council, Mr. John Onyeakpa commended the governor for fulfilling his promise to the people and requested him to extend the inter-state roads in Orumba South to Ezira - Enugu-Umuonyia road.

Earlier, the President-General of the Ekwulobia Development Union (EDU) pointed out that the success of the election that threw up governor Obiano epitomizes the beginning of the long awaited peace and tranquillity in the community.