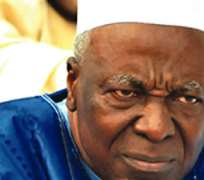 Plan to use the ongoing National Conference to extend the tenure of President Goodluck Jonathan and other political office holders has been exposed.

A document prepared by one of the delegates from the South-South has been distributed to some delegates on the need to postpone the 2015 general elections by 18 months.

The document, which was prepared by Okon Osung, was distributed to the delegates last week.

Osung, who spoke with journalists in Abuja on Friday evening, confirmed the distribution of the documents.

He, however, insisted that he solely prepared the document, which he entitled, 'Preserve Nigeria's democracy: Postpone the 2015 election now.'

He said there was the need for the President or National Assembly declaring a 'politico-administrative moratorium or cooling-off period' before the conduct of the elections scheduled for February 2015.

He said, 'This calls for the postponement or deferment of the scheduled 2015 elections by at least 18 months, while retaining all the democratic institutions at all levels of governance and across the entire spectrum of the country's political divide, without any bias to the statutory termination dates of such democratic institutions.

'It is imperatively necessary to speedily put the proposed politico-administrative moratorium into effect, and Nigeria would not be lacking in terms of historical precedent of having to rise to a difficult and unforeseen contingency or occasion for which the country's constitution had not made adequate provision.'

He said the extension of tenure to be occasioned with the postponement would be based on the invocation of what he called the 'the doctrine of necessity' by the National Assembly.

Osung added that it would be wrong to call the proposal tenure elongation or tenure extension, as his suggestion would profit all Nigerians across the political divide.

He said it would be wrong to go for elections now, saying there was the need to check the phenomenon of military intervention now that the country seemed to be experiencing gradual institutionalisation of democratic process.

He also said almost all the zones in the country were experiencing crises and that holding of election now could aggravate such crises.

'The North-East has been infested with Boko Haram; South-South with the Movement for the Emancipation of the Niger Delta and other militants who specialise in the vandalism of oil installations and kidnapping; the South-East with the Movement for the Actualisation of the Sovereign State of Biafra, who specialises in kidnapping and robbery; while the Oodua Peoples Congress in the South-West is hobbled by lynching cultism, ritual killings and other fetish bestial practices.

'Fulani herdsmen are ravaging the North-Central, killing and maiming innocent civilians as ominous cloud of insecurity is hanging perilously and menacingly over the country like the Sword of Damocles currently,' he said. Punch