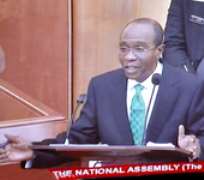 The bank said this in its External Sector Development report for the fourth quarter of 2013 which was posted on its Website.

It said that the figure represented an increase of 24.3 per cent from the 3.97 billion dollars recorded in the third quarter of 2013.

CBN also said that the development was attributable to an increase in direct and portfolio investment inflows.

It added that the increase in the figure represented a growth of 16.1 per cent.

The apex bank said that portfolio investment inflow remained dominant and accounted for 79.7 per cent of total foreign inflows.

It also said that direct investment inflows accounted for 20.3 per cent of the total foreign inflow.

The bank explained that the higher inflow of foreign capital in the fourth quarter of 2013 was a welcome development which should be sustained through macro-economic stability.

It said that the positive growth had resulted into an enhanced investment environment which includes good corporate governance.