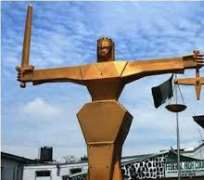 The Court if Appeal sitting Benin, Edo State on Thursday ruled that the former Governor of Delta State, James Ibori, has a case to answer on the money laundering charge proffered against him by the Economic and Financial Crimes Commission (EFCC).

Six years ago, Justice Marcel Awokulehin had struck out all 170-count charge of money laundering preferred against the former governor.

A three-man panel of justices at the Benin Division of the Court of Appeal ruled that the ex- governor who is currently serving a 13-year jail term in a London prison, has a case to answer.

The unanimous decision of court setting aside the infamous ruling of Justice Awokulehin, according to an EFCC statement, was delivered by Justice Ibrahim Saulawa and was supported by Justices P. M Ekpe and H. A Barka respectively.

Displeased with the controversial ruling by Justice Awokulehin, then of the Federal High Court, Asaba, the EFCC, had approached the appellate court to set aside the judgment on the grounds that the court erred in law.

The appeal was predicated on four grounds. One, that the trial judge looked at the proof of evidence and evaluated same as if the prosecution had called all its witnesses and trial, has been concluded.

Secondly, that the procedure is by way of summary trial and not trial by indictment or information.

Fourthly, that the judgment is unwarranted, unreasonable and against the weight of proof of evidence filed by the prosecution in support of the charges.

Holding that the appeal was meritorious, Justice Salauwa, resolved all the four issues for determination in favour of the EFCC and directed that the matter be re-assigned to another judge of the Federal High Court for continuation of trial.

With this judgment, the coast is clear for Ibori to face trial in Nigeria upon the completion of his jail term in London.