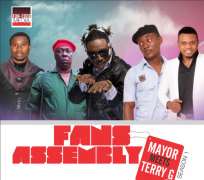 After the successful release of his album, the head-honcho of TGP Entertainment and Nigerian's hip-hop celebrity, Gabriel Amanyi otherwise known as Terry G has announced May 24th, 2014 as the premier date of the movie he headlined.

This movie titled, Fans Assembly runs in seasonal package, and however it had the musician as the major headliner of its season 1.

Earlier, the producer and initiator of Fans Assembly, Fun-Code Media Limited in a media parley revealed that the much anticipated movie Terry G headlined has a compilation of exclusive comedy skits, above the normal YouTube uploads on the internet.

Interestingly, a day before the pronounced date for the premier, top musicians like Mr. Raw, Mode9, Splash, Zoro, Regis, and Bosalin will be opening the stage with a back-to-back music blast on May 23rd, 2014 at the same venue located at Emma Ugorji Estate in World Bank, Owerri, Imo state.