'They no longer respect the office of President', Says Awuse 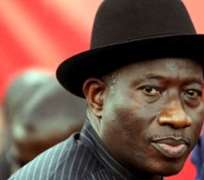 Chief Sergeant Awuse, a frontline politician and delegate to the on-going National Conference, has accused some Nigerians for not respecting the office of the President.

Awuse, who spoke yesterday in Port Harcourt at the Niger Delta consultative meeting with delegates to the National Conference, expressed dissatisfaction with the attitude of some sections of the country to Jonathan's presidency.

The meeting which was organised by the Pan-Niger Delta Conference (PNDC) was an interactive forum between the delegates and stakeholders from the region to assess the performance of the delegates.


He said some events in the country had been blown out of proportion just to paint Jonathan in bad light because he is from minority, Niger Delta region. Stating that Jonathan was being blackmailed to drop his second term ambition, he noted: 'No negotiation on the presidency. We are not going to negotiate with anybody. All sorts of arguments were brought up aimed at blackmailing President Jonathan. He is the president and he should not be blackmailed.

Awuse, who is also a chieftain of the Peoples Democratic Party (PDP), disclosed that delegates to the National Conference, from the South-south zone, unanimously agreed that the federating units in the Nigerian system should remain the states, as against the return to the regional government being canvassed by delegates from other parts of the country.

'We said in the South-south meeting that the federating units should remain the states, because returning to regional governments will take us backward. Some parts of Nigeria, especially the South-west geopolitical zone said they want a return to the regional governments we had before, but we are not comfortable with that,' he said.

He however acknowledged that the zone might not get all it was demanding for at the on-going conference, but said the zone would apply the principles of give and take, negotiation and compromise.

Another delegate from the zone, Comrade Isaac Osuaka Sankara, however added that nothing good would come out of the forth republic unless there was a restructuring to make the centre less attractive.

He said, 'there are some people in the conference, and they are in the majority, who wanted to preserve the existing structure. They said that the only thing that is wrong is governance and that when governance is improved, Nigeria will be better.

'But the whole structure is defective. There is need for a totally restructured Nigerian state, using the 1963 Constitution as the baseline; it was a constitution that was not imposed but a product of discussions and contributions.

'There should be a restoration of a true federal system that will be more beneficial to all parts of the country. That is when taxation can facilitate sustainable development. 'Much as we desire a united Nigeria, a few people must not be made to bear the cost of a united Nigeria