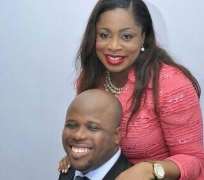 It was a night of glitz and 'love in the air' at the Vodafone Ghana Music Awards which took place on Saturday, 3rd of May in Accra, when Big Brother Africa 'The Chase' housemates and lovers, Elikem Kumordzi and Pokello Nare, got engaged on stage.
It was a surprisingly moment for the Guests who were stunned at the scenario when the couple, popularly referred to as 'Polikem' amongst their fans, took to the stage to announce the winner and present the award for 'Best Collabo of the year' and then suddenly Elikem made an alternative move by getting down on one knee to pop the question 'Would you marry me'.

A dazed fashionista and shoe store owner, Pokello went numb at his public approach, but thereafter, found her voice back and gave him a Yes! For a reply.

Apparently, she could not hide how overwhelmed the whole scenario made her feel, when she took to the social media to let out her feelings, saying, “I was wondering why he just grabbed the envelop from me like that, next thing, he starts a speech and I am thinking , there he goes with his talking

“Those who know me will tell you that I am very shy. I never saw such a proposal coming and I went numb because of where we were all eyes on me!”

'Polikem' who started off a relationship during the 8th season of Big Brother Africa reality-television show, got more closer after the show, with each paying visits to the other home country to meet their respective families and fans.