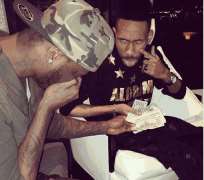 Yesterday was a hard time for Chelsea football club fans as they lost to Athletico Madrid, those who put their bet in the game went home sobbing, Peter Okoye of Psquare who is a chelsea fan is a victim to this.

He had a football bet with singer, Phyno. Peter, who is a die hard Chelsea fan, predicted that Chelsea would win last night's match against Athletico Madrid, while Phyno predicted otherwise and they had a 5000dollar bet.