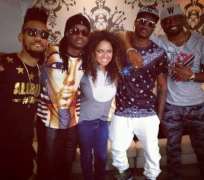 It seems after the whole squall, the group; P-Square is back , as report gathered by Nollywoodgists.com has it that the duo are already on set of the video for their new single, 'Testimony'.

'Testimony' which has been the rave of radio stations' play since its first appearance, sees the duo narrating how far they have come since their entrance into the music scene.

And of course, it's a testimony for the brothers as they have made lots of cash, fame, married to beautiful ladies who gave them cute children and loads of properties and endorsement deals to their names.

But the question is, could this be the reason why the duo's manager/brothet Paul Okoye twitted : After 10 years of hard work, it's over I'm done?