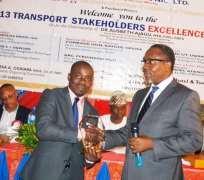 LAGOS 24 April 2014 -Award-winning airline, Dana Air, has added yet another feather to its cap as the airline has been adjudged as the 'Domestic Airline Operator of the Year 2013' by the Transport & Logistics Nigeria Limited, organizers of the Transport Stakeholders' Excellence Awards. Dana Airline emerged after a thorough rigorous screening by a team of assessors and the result was subsequently confirmed by a public opinion survey.

The transport and logistics award is an initiative designed to reward, celebrate, encourage, and project transport stakeholders who have contributed significantly towards the advancement and development of logistics and transport in all ramifications.

Dana Air was presented with the coveted plaque at the Awards ceremony which held at the Lagos Sheraton Hotels & Towers and was attended by numerous high profile guests including Honorable Kayode Opeifa, the Lagos state commissioner for transport as special guest of honor as well as representatives of the Osun State Governor and the permanent secretary federal ministry of transport.

Commenting on the award, the Chief Operating Officer and Accountable Manager of Dana Air, Mr. Yvan Drewinsky said: 'It's gratifying that the airline has continued to attract positive attention and has again been voted as the airline of the year by stakeholders in the transport and logistics sector. More importantly, Dana Air takes this award as a vote of confidence from our discerning customers and we want to re-assure them that we will intensify our efforts at building a world class airline in Nigeria'.

Mr. Drewinsky noted that the vision of Dana Air is to become Nigeria's most reliable and customer-friendly airline, and also stated that the airline will not rest on its oars but rather strive to continually look at new and exciting ways of exceeding the aspirations of its guests.

Speaking in same vein, the chairman of the awards organizing committee, Engineer Emeka Ogwara said that Dana Air merits the award as it has shown commitment to very rigorous certification tests which ascertains the premium that the airline places on safety of the flying public in general and its passengers in particular. Mr. Ogwara further stated that Dana Air was able to recommence air services in record time after the successful conduct of its operational audit.

Since commencing operations in November 2001, Dana Air has been nominated for several awards in Nigeria and was named 'Best IT-Driven Airline of the Year 2009' by two (2) renowned Information Technology bodies. The airline also bagged the Aviation Service Excellence Award at the West African Branding Excellence Awards 2010 and was named the Best Airline Operator of the Year at the Lagos Enterprise Awards 2010.

It will be recalled that Dana Air is the only domestic airline to have successfully undergone an operational audit conducted by the Nigerian Civil Aviation Authority (NCAA), in conjunction with its foreign partners The Flight Safety Group. The airline is reputed for its world-class customer service, in-flight service and on-time performance.