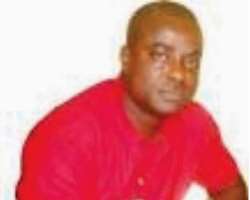 Serious crisis has hit sun newspapers over the court case against Ebere Wabara by Abia govt. A top staff that pleaded anonymity revealed that the usual Monday management meeting was stormy.

According to this reliable source that is an editor, most of the top management staff are not happy with their publisher Orji Uzor kalu over his crude style of using his papers to malign the characters of his perceived enemies.

They argued that OUK is the one sponsoring Ebere Wabara using Sun, even against their wish. Now that Wabara is in trouble OUK is advising him to travel abroad on health reasons, so as to escape arrest by the police that have declared him (Wabara) wanted.

Sun management we learnt is not also happy that they are being owed four months salary. The staff it was learnt has already reported their woes to NUJ NLC and CLO. Meanwhile Ebere it was gathered is trying to flee the country but police said they are on alert.