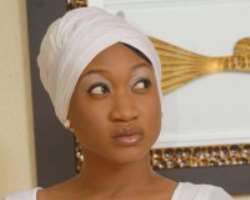 Popular Nollywood actress Oge Okoye, is indeed one of those actress who can stand heads high and boast of a good and happy home. Though it might not be all rosy, but the saltry actress has been able to keep her private family life from the public.

It would be recalled that last year, for her hardwork and contributions to the growth and development of Igbo land, the star actress, was being rewarded with a chieftaincy title in Enugu State by one of the traditional rulers in the state.

The lovely actress, who was born in London and graduated from the Nnamdi Azikiwe University with a degree in Theatre Arts, has been married for 7years now and she has every course to glorify God for all that has been coming her way.

Recently, the actress displayed the pictures of her lovely kids which are signs of her lasting marital status.