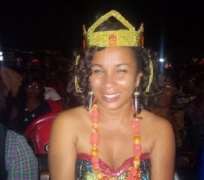 The weeks long feud trailing the Cross River chapter of Actors Guild of Nigeria, AGN election over who the authentic State Chairman of the Guild is, finally came to an end following the recent visit by the National President of the Guild, Ibinabo Fiberesima to the chapter to clear the air.

In a statement filed to the state police commissioner, Kola Sodipo, the AGN boss confirmed Monica Udofia as the newly elected chairperson of the guild in Cross River State.

Commenting on the issue, Ibinabo attributed the crisis in the guild to greed while calling on members to shelf their grievances and return back to move the guild forward.

According to her “I came to sort out the election issue. I've realized that, most states that we have elections, people who lost out refuse to settle; they think causing problems would solve it. I don't mind going to every state because things are getting out of hand; people must learn to abide to the rule of law.”

Meanwhile, following her submission to the police, there are strong indications that the former chairman of the chapter, Eric Anderson may be summoned to answer questions on issues of Diamond bank teller forgery and other related criminal offenses.