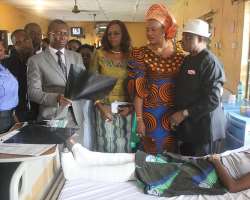 The new governor of Anambra State, Chief Willie Obiano showed the compassionate side of leadership at the weekend when he made a brisk stopover at the Nnamdi Azikiwe Hospital, Nnewi to cheer up the students of Community Secondary School Umuokpu Awka who were recently survived a fatal automobile accident.

The students were said to be returning from school when a fast speeding car lost control and ran over them, killing seven and leaving many fatally wounded. On hearing the story of the accident and learning about the plight of the survivors, Governor Obiano had suspended every other pressing engagement and rushed down from Awka to Nnewi to assure the students that his administration would not abandon them in their hour of need.

'Don't despair. You are in good hands. We shall take care of you. We shall pay your hospital bills and make sure that nothing wrong will happen to you,' the Governor whispered to one of the accident victims, Chinyere, as he stood by her bedside.

Moved by the sight of patients sweating profusely from the searing heat in the wards, Governor Obiano also promised to change the lot of the hospital. 'I will provide you a 500KVA generator to ensure that there is a steady supply of electricity in this hospital,' he declared.

According to him, primary healthcare occupies a priority position in the plan of his administration to reposition Anambra State as a leader in all indices of development in the country.

Earlier in his welcoming remarks, the Chief Medical Director of Nnamdi Azikiwe Teaching Hospital, Pro. A. O Igwegbe had commended the governor for showing great 'character, compassion and pragmatism.'

Prof. Igwegbe also explained that the challenge facing the 25-year old institution was paucity of funds to carry out its set goals and objectives. 'Presently, we are dependent on generators as a source of power for the running of the hospital which further depletes our resources,' he said, further pointing out that the hospital was still operating on a temporary site and all efforts were geared towards moving to its permanent site in the nexus between Nnewi, Ozubulu and Oraifite towns.