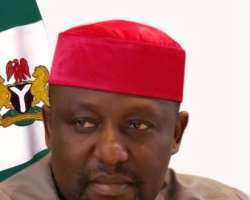 Till this time, I still refer the presidential visit and People's Democratic Party's rally in Owerri, on February 22, 2014 as momentary outburst. From various quarters of the Party's faithful and loyalists, Champaign were actually popped. Some bigwigs and lords made attacking statements against the present administration in Imo, and even that of the All Progressives Congress.

To some, that very day, an election was held and won. Governor Okorocha lost the baton, while PDP and yet to be decided or even elected candidate took over. What's the point? Federal might visited the State again, and the same statement after which the Party lost the election to APGA was made.

As a colleague would point out, “jersey doesn't play football; rally does not win election.” True talk! That the president visited Imo and assured electorates and Party faithful that PDP will regain power come 2015 is not a guarantee to a win-win affair. Mind you, the President is also ambitious, and needs your vote again.

That the President promised you of domination come 2015, may likely be another promise made to a woman on bed. There are more to be done than expected. Now, PDP should decide on if they should drop the Champaign and even go for an Alumo Bitter, or continue to count lose.

To this memorable event that called for a celebration in February, it can't be complete without adding that of the Imo brooms-gate scandal where APC women stormed the city of Owerri, together with the rally venue at Dan Anyiam stadium and swept off the footprints of President Goodluck Jonathan and his Abuja entourage. After that successful outing by the women, it was also perceived that the Okorocha's camp had a party, and a Champaign was popped.

This is that season when political parties would go eye-to-eye, no matter members would as well go on an internal mind game against each other who stands a chance of contesting same targeted position. There is no kind of statement or act you will not see on air now. Propagandists are all well employed and fixed by their paymasters now. All candidates are now consolidating and solidifying. Who will stay behind resting on past glory that for a long time expired?

Well, let's take Imo as a case study again, where we have a governor who feels too complacent in terms of feedback and communication with the people. He feels he is getting it right, and that he is still with the people. The honest and precise truth which nobody will tell him is that he has lost contact and communication with the Imo electorates, who basically are the original and real people for guerrilla seasons.

Of course, he is working with some Imo sons and daughters as appointees, but he is far long away from the real structure, the Imo electorates. So far, activities are seen on ground. We are seeing great infrastructural development in the State, but the big question is: are they what the Imo electorates asked for? They asked for employments and jobs, but the governor gave them office buildings without engagement and empowerment. They asked for industries, but he gave them hotels. They asked for houses and homes at a lower rent cost, but he gave them Concorde extension where only the rich could afford.

I wish not to refrain from the fact that something is happening in Imo, as the Information Minister, Labaran Maku pointed out last time he visited the State. Yes, let's pop Champaign! Something is happening, but in whose interest? By now, the governor could have developed a small carpentry industry where most of the school chairs imported from China could also have been constructed. At least, some Imo people could have usefully been employed. The State could also have saved the importation cost. But then, we have imported school uniforms, chairs, building and interior furniture. Investing wrongly, even while the people are left to go hungry without human empowerment. Why don't we pop Champaign?

In addition, failing to listen to feedback, ignoring alternative viewpoints, or failing to seek clarity through active listening has undermined Okorocha's leadership effectiveness and trust. He has now joined the APC of all parties in Nigeria. One expected that his decision to join the newly merged party was people-oriented, rather a selfish one. He wants to be Nigeria's president at all cost without due consultation amongst his people.

Significances like this should serve as a big lesson to PDP. One who robs Peter to pay Paul will always depend on the support of Paul. A PDP in Imo is equivalent to the one in Abuja and at the national level. The party's decision to maintain its stance as a formidable and ruling party should be grass-rooted among the people, the electorates. Getting it right here in Imo state sounds it a win-win affair for the party at the national level.

In the light of this fact, PDP should make strong leadership their backbone. They should engage the right people. Candidates with unquestionable characters should be giving an opportunity to contest. PDP must have it in mind that leadership can be an elusive characteristic, and developing leaders to their full potential remains one of the great challenges for political parties today. In a situation where the right candidates are fielded, they create vision, support the strategies, and are the catalyst for developing the individual bench strength to move the party forward for future elections. Of course, they need to field in their first eleven before popping Champaign again.

In this connection, the right candidates are receiving endorsements from various genuine and noteworthy groups. And from assessment, the men and women receiving such call to contest are those whose existence have been felt through one way or the other. I would describe such act by people themselves as an Arab spring in Niger. The people now want to get it right with the candidates. They have been able to find out that every day the world at large is negotiating.


Interestingly, we have seen instances where States are now endorsing and clamoring for some seating governors and even first timers to advance, by joining the race to the National assembly. It all happened in Abia, Enugu, Lagos, Rivers, Imo, Akwa Ibom and so on. The likes of Fashola, Akpabio, Amechi, Asoluka, Chime and few other productive candidates have all been forced into the race by their people. Especially in Enugu, we've also seen how power play is taking heads between Governor Sullivan Chime and Senator Ike Ekweremadu.

Having performed creditably, the people are now passing vote of confidence on Chime to try a shot at the Senate, which Ekweremadu finds it as an intimidating one on his person. However, it never stopped there, because it's not only a PDP revolution, APC is undergoing it as well. The one we cannot forget in a hurry is the mother of all endorsements which displayed in Imo by aggrieved groups and citizens over why their first eleven will always be shutout in elections through denial of Party tickets.

One of the Press releases that made great news is the one from the National Association of Mbaise Students (NAMS), who called on the governing board Chairman, Oil and Gas Free Zones Authority, Hon. Chris Asoluka (Okwuru Oha) to join the race for Imo East Owerri senatorial zone.

In a release jointly signed by the National President, Stanley Anyanwu and the Secretary, Nwaiwu Chioma, the federated students tasked on the Owerri West political leader to join the race and stand by his people-giving mandate or get lynched.

Although Senator Chris Anyanwu is occupying the position, but NAMS emphasized that Asoluka as the preferred candidate was chosen based on his past track record which the entire Imo students had benefited from.

Citing that after a thorough survey, the release further stressed that the group is yet to see another refined candidate who would stand Dr. Asoluka's intimidating profile, legislative experience and sound representation come 2015.

“Having assessed through your legacy and remembering key moments and role you played in past governments here in the State and beyond, we want to make it known and clear to you that come 2015, the Owerri Senatorial District (East Central) would be vacant for you to occupy. Right now, we need a credible candidate like you as our representative, for we know with you, the entire Nigerian Students' voices would be heard.”

To stand by his people-giving mandate or get lynched? Yes, it sounds so harsh, but that's the kind of word the old PDP forced into the mouths of electorates. When people appoint their candidates to contest, at the back the party anoints their choice. When people seek for credible candidates, the party goes round to handpick. It was not just from the students that Asoluka even received this endorsement, it also came from journalists and media practitioners, who saw it that from his past record, he would also be playing an active and better role at the National Assembly.

The National ruling party must wakeup from slumber, by taking fair step against wilful suicide. They should not lay much emphasis on individual candidates with resources, but those of them with leadership skill set. Of course both resources and skill set complements. They should look beyond politics, through differentiating philanthropy and leadership.

Even at that, Anambra election should serve as agenda setting for them. If philanthropy and resources alone should be a determining factor, the likes of Ifeanyi Ubah and Chris Ngige should be the governor by now. Who says PDP should not run a politics of populism? Such situation should amount when only the party wants to test their popularity among the electorates. Right now, PDP needs no introduction to the people because they are grass-rooted and known in the system. What they need now are candidates who can go down to the people and coast victories for them. The party must not be a graveyard for humble people.

It feels good seeing the likes of Chief Achike Udenwa, Senator Ifeanyi Araraume, Senator Chris Anyanwu and few others returning to the Party, meaning right now, nobody or group of people should be seen as lords. Everybody is a decision maker on his own level and weight. Good news for contestants- consult and join the race. Also, and better still as Okorocha's spokesman would react to their defection which should serve as a quick reminder to them, “it is good that those we would see as a problem are all now in one basket”. Meaning, if they fail to plan now, together as a team they will sink, it will be the mother of it all.