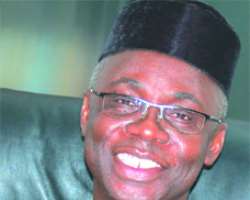 BEVERLY HILLS, CA, March 19, (THEWILL) - The Christian delegates at the ongoing National Conference have debunked media reports suggesting that they accused the leadership of the conference of bias.

In a statement signed by Godswill Iyoha Iyoke Esq.
on behalf of the delegates said the media reports on the comments credited to Pastor Tunde Bakare and Mr.

Mike Ozekhome were erroneously presented in the media as positions of the Christian delegates whereas the duo are not representing Christians at the conference.

'The Daily Sun of instant date has this caption; 'Conference in shocking start: Christian delegates accuse leadership of bias'.

None of these 2 eminent Nigerians represent Christians at the on-going Confab.

'For clarity and avoidance of doubt, the Christian delegates to the Confab are; 1.

Bishop J.
D Bagobiri 2.
Barr.
J.
A Achimugu; 3.
Professor Andrew Haruna 4.
Dr (Mrs.
) Kate Okpareke 5.
Pastor Emmanuel Olatubosun; and 6.
The undersigned, Godswill Iyoha Iyoke 'We wish to say that none of our 6 member delegates made any contributions on the floor of the conference; or on those issues under reference.

We are therefore worried as to how clear unambiguous introductions and contributions by others could be credited to us.

Furthermore, we do not find anything unusual in the comments or conduct of the said personalities at the conference to be clothed with the cloak of controversy and contention as the reports seek to do.